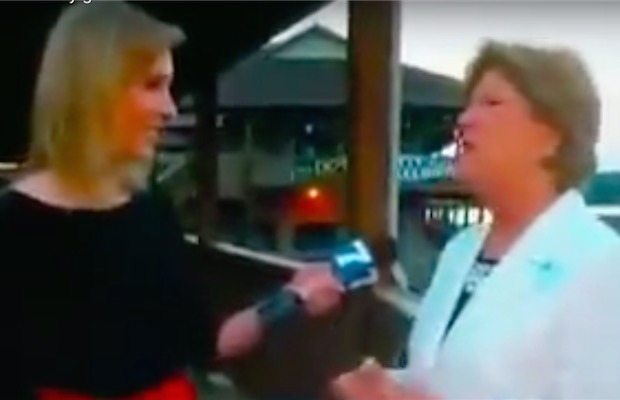 Two members of a Virginia-based television station were shot and killed during a live broadcast Wednesday morning near Roanoke, Virginia, WDBJ7-TV reports.

The shooting occurred around 6:45 a.m. at Smith Mountain Lake, a Virginia resort. Killed were Adam Ward, 27, and Alison Parker, 24. According to USA Today, Governor Terry McAuliffe confirmed that police are aware of who the shooter is and are in the midst of pursuing him.

Warning: Full video of the incident can be found here. Extremely graphic content is found. Viewer discretion is advised.

“This kind of loss will resonate in these halls for a long, long time as we remember in their short lives what dedicated journalism they produced and what outstanding journalists they were,” offered station manager Jeffrey Marks.

Chris Hurst, an anchor for the station, claims to have been Parker's boyfriend. “She was the most radiant woman I ever met. And for some reason she loved me back. She loved her family, her parents and her brother,” he tweeted.

The station has shared a picture of Parker and Ward, with a caption that reads, “We love you, Alison and Adam.”

We love you, Alison and Adam. pic.twitter.com/hLSzQi06XE

The shooter, who has reportedly been identified as Vester Lee Flanagan, 41, has allegedly killed himself. It’s being said that he also went by the name Bryce Williams. He was previously employed by WDBJ7-TV, and had since been fired.

According to Gawker, Flanagan shared two videos of the shooting to his Twitter and Facebook accounts, which have since been suspended.

Vester Flanagan is a former reporter at WBDJ who went by the name Bryce Williams. He was fired by the station at some point in the past.

Breaking. Police on scene of person who just shot himself on I 66 eastbound. pic.twitter.com/BTKVfi9K0b

Flanagan has reportedly survived the suicide attempt and is in critical condition, according to Augusta County Sheriff’s office. Initial reports claimed he had died from the self-inflicted wound, but it is now being said that he “has a pulse.”

After being transported to Inova Fairfax Hospital, Flanagan reportedly passed away around 1:30 p.m.