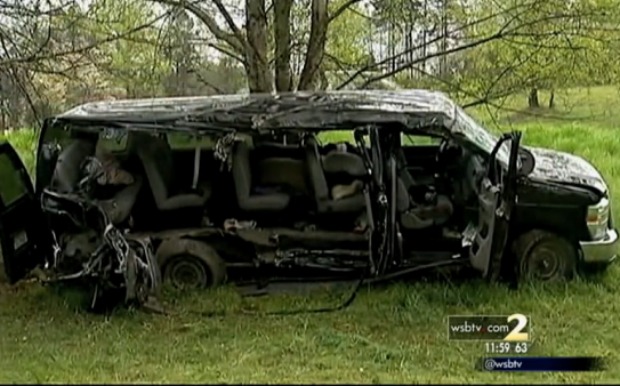 According to WSBTV, two touring bands were involved in a van crash that left three dead early this morning in Jackson County, Georgia. The two bands—12 people (three women, nine men) in total—were sharing the 15-passenger van, en route from South Carolina to a show in Atlanta, when the driver lost control, according to police. (Updated below.)

Georgia State Patrol Cpl. Scott Smith told WSBTV, “The driver lost control, either by going to sleep or some other means, we're still investigating that. He left the roadway, travelled about 300 feet off the roadway and struck a tree with the passenger side of the van.”

The two bands involved in the crash have been identified as Wormreich and Khaotika. The headlining act for the Atlanta show, Kult Ov Azazel, released a statement today:

“Unfortunately tonight's show in Atlanta, GA will be canceled,” the band said. “The van carrying Wormreich and Khaotika was in a horrible accident this morning. We cannot go into details due to respect to the families of the involved and we are sure details will soon be available through the other parties when the time is right. Our thoughts are with those involved and their families.”

Three others are in critical condition. Eight people in total were taken to the hospital.

UPDATE: A fund has been set up for the survivors of the crash and the families. A recent update to the fund states that Khaotika vocalist Lariyah Hayes is “out of surgery and in recovery.” Her injuries were non-life-threatening, according to Metal Insider.