This is not a drill! Issues‘ Tyler Carter has revived the Woe, Is Me Instagram page, sending fans into a frenzy and sparking rumors of a potential reunion or anniversary tour. Is it possible? Could we see a 10 year anniversary tour for Number(s) next year?

We were not ready for this.

Read more: Next ‘Suicide Squad’ film will be “total reboot” – not a sequel 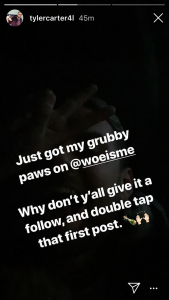 “Comment if Number[s] meant something to you?” the post reads “What were you doing in 2010, and did it help you through that time in your life? Comment your favorite lyrics!”

Number(s) was the band’s debut album released on August 30, 2010 through Rise Records. It’s the only album to feature the original lineup.

The page has been responding to comments, claiming that its a tribute page to the original Woe, Is Me lineup.

So maybe the revived Instagram is simply a tribute page?

As pointed out by one user, the 10 year anniversary for the debut album is quickly approaching. 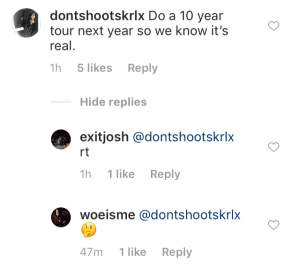 We’re keeping our fingers crossed for that 10 year tour!

If you need a refresher, you can check out Woe, Is Me’s “Fame > Demise” below!

And just for nostalgia purposes, let’s not forget the “[&] Delinquents” music video.

We love a good throwback.

Would you be excited for a Woe, Is Me anniversary tour? What was your favorite track from Number(s)?