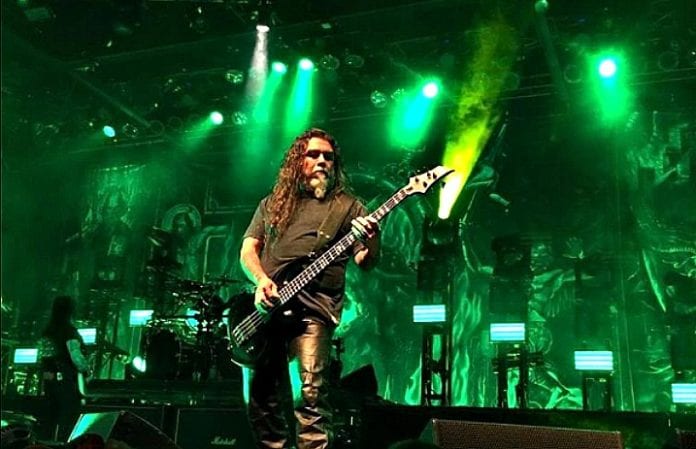 Europeans are known to be some of the most die-hard metalheads out there, and for many, there is no greater shredding force than the legendary Slayer.

This has proved to be no more true than in the town of Demidiv, Ukraine, where the city's unveiled a statue honoring Slayer and frontman/bassist Tom Araya outside its XII Months Zoo.

The zoo proudly showed off their newly erected piece of art in a Facebook post complete with images perfectly capturing Araya's majestic hair in the gleaming sunlight.

The statue features the band's iconic logo on a giant boulder behind Araya, with the slab of stone underneath him reading lyrics from the Slayer tune “Dead Skin Mask.”

“In the depths of a mind insane / Fantasy and reality are the same,” it says.

Though we aren't quite sure what compelled the XII Months Zoo to honor Araya and Slayer in such unique way, we can be sure to verify that it is awesome. Any trip to Ukraine would no longer be acceptable without stopping to pay tribute to this beautiful creation.

Below, you can see the detailed images of the statue, which took just over a month to complete. Beneath the zoo's post reads a rough translation announcing the hard work that it took to craft this piece of art. (Via Loudwire)

“Dear friends, we have finally finished our discussions and alterations, and can say – a sculpture of Tom Araya in our park is completed and submitted for your critical inspection. I can not tell you how hard it was and how much we argued about the accuracy of, say, shape the beard  :) or Tom’s guitar. I put the results of our work on the official website of Tom, I have heard that he is now back from Chile and the rest before the European tour – perhaps peep us. At least Sandra Araya (wife) told me that she liked.. God forbid… I also told her how things were arguing about any details on the sculpture and even joked that thankfully Tom at the concert – and if the sculpture was called, for example, Tom on the beach… I am pleased that Ukraine has paid attention to the whole army (millions) of Slayer fans and Tom. Take a look at his website  :) and all approval. Propaganda, war ensemble, burial to be.”