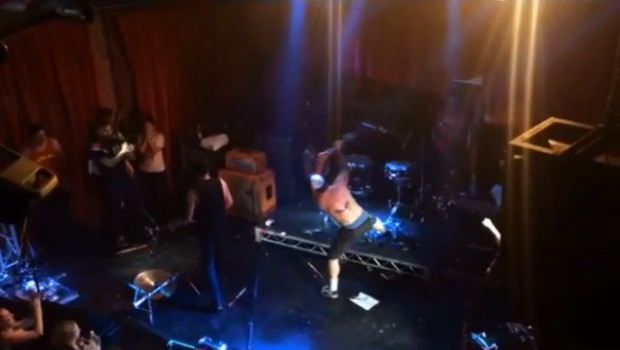 Unwritten Law, who have a history of physical altercations, were seeing red at a recent concert in Australia.  Below, you can watch video, posted by music photographer Max Fairclough (Bring Me The Horizon, Of Mice & Men), of the band trashing the stage of a venue where their set was reportedly cut short (by 5 songs). The incident took place at the Hits & Pits Tour at Capitol & Amps in Perth, Australia.

“At the final date of the tour, headliners Unwritten Law played for around 40 minutes before hitting a midnight curfew and having the power cut, despite Russo begging for two more songs.

The power was cut during 'Up All Night,' which Youman began after the band had been told their set was over. They finished the song with only drums and a crowd singalong and the pair then threw backline drums, and cymbals owned by The Causalities drummer Mark Eggers, around the stage.”

Check out the video below, and let us know what you think: