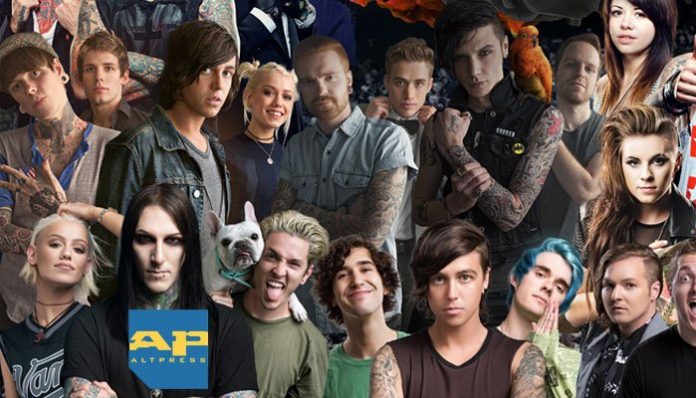 Starting June 29-30 in Atlantic City, New Jersey, the Vans Warped Tour will hold its final high-decibel celebrations of punk rock and youth culture. Once the traveling roadshow returns to Shoreline Amphitheatre in Mountain View, California, July 20 and 21, founder Kevin Lyman’s great touring experiment will become a part of rock ’n’ roll history, much like how Grateful Dead tours were for the hippies and Lollapalooza was for the X Generation.

On its surface, Warped Tour was America’s longest-running touring festival where listeners young and old could check out current and future favorites in the realm of Music Played Quickly And Loudly On Guitars. (That’s most of the genres, right?) Trudge harder into the psychic asphalt, though, and there was clearly a sense of community being created by those who didn’t fit in—nor did they want to. The face-tatted lifers coexisted with the legions of young listeners sporting hair dyed with colors not readily found in nature, and everybody went home exhausted, elated and enlightened (thanks to the tour’s coordination of nonprofit entities on the show grounds).

Read more: Warped Tour has a traveling museum thanks to photographer Lisa Johnson

AP has worked closely with Lyman and Warped over the last 15 years to assist in spreading this culture and community far and wide. And we’re doing it one more time with our new issue: Our Valentine to Warped captures all the history in show posters, band lineups, photos from the front, back and side of the stages and more than a couple of anecdotes from the people who were there.

We’ll be offering three different covers: The first, a collage of photos of all the bands who appeared on 15 years of AP Warped covers. There’s also special limited-edition covers featuring My Chemical Romance (during their Warped stint in 2004) and Paramore (during a Warped set in 2007).

Warped Tour will no longer be a moving concern by the end of July, but the community that it has fostered will undoubtedly live on. It’s up to all of us to pay that sense of discovery forward by supporting/creating the local scenes in your own backyards or championing the efforts of people whose work resonates in your heart in the most vibrant of ways. (High fives to you, Sad Summer.) In the meantime, one more time for the world: Viva Warped!

ALSO IN THIS WARPED TOUR ISSUE:

Having kept their creative focus while everything around them burned (literally), HUNNY are rising up from the San Fernando Valley with their perfunctory electronic and new-wave pop, teeming with love, heartbreak, neuroses and impeccably sweet dancing shoes. And the world looks ready: Prior to aligning themselves with Epitaph, the band garnered streaming numbers usually reserved for the label’s catalog stature artists. HUNNY are truly the band you want to say yes, yes, yes, yes, yes to.

It’s an interesting time to be alive right now. Just ask the young women of DOLL SKIN. The quartet have strong views on what it takes to make the world a better place, and they can back it up with songs capable of making a packed club sweat and rile up a crowd alongside such bona fide hard rockers as Halestorm and In This Moment. More proof that chemistry is often greater than the spirit within.

UNDEROATH’s Aaron Gillespie reflects on everything from his early days slogging it out on tour to trying on EDM star Rezz’s ticking-time-bomb sunglasses in 10 TOPICS.

As the lead singer of THE WORD ALIVE, Telle Smith has lived a life of great highs, deep lows, amazing opportunities and serious regrets. And he welcomes all of it, as he explains in this month’s IT GOT BETTER.

In the last few years, hardcore hopefuls KNOCKED LOOSE have publicly displayed their propensity to destroy everything in their path. In this month’s ALBUM ANATOMY, frontman Bryan Garris describes the motivations and process behind the band’s new album and the one intangible thing that made all the difference in its creation.

Emo-rap upstart JUMEX grew up on My Chemical Romance and Operation Ivy before being enthralled by hip-hop and trap beats. He tells us about his sonic journeys as well as his priorities as both artist and listener.

Deep cuts from awesome bands on Warped get listed in this month’s 10 Essential; 12 Bands features our contributors’ latest obsessions; and both photos from our archives and fan art from the planet make our world go round. Preorder all this love right here!