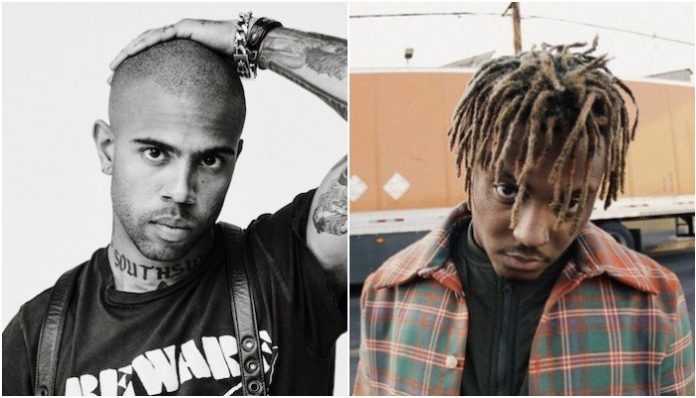 Vic Mensa believes the hip-hop/rap scene is also to blame for Juice WRLD‘s death. He also states that rappers should be more careful about what they say for their audience.

Jarad Anthony Higgins, died after suffering a seizure in a Chicago airport, TMZ reports. The incident occurred after Higgins deplaned from a private jet traveling from California to his hometown of Chicago.

Read more: Bring Me The Horizon drop Halsey collab on surprise ‘Music To Listen To’ EP

In an interview with TMZ, Vic Mensa remarked on artists’ influence on young children and how the rap community may contribute to their decisions when it comes to drug use.

“I think that as members of the hip hop community, we need to take responsibility for the things that we say,” Mensa states. “We need to recognize that the shit that we talk about influences children. So, when we steady pushing a message of lean and Percocets and Xans we are polluting the minds of the youth.”

“We have a responsibility to give it to them in a real way. Not to say you can’t talk about your real life and the things that are happening, but I think that we need to start holding each other and ourselves accountable for our glorification of the drug culture… Anything else, that’s parasitic to our people to just act like this is the shit to be on lean all the time.”

He goes on to say that even though he didn’t think about how he portrayed himself before, it’s something Mensa worries about now.

“In younger times, I definitely did not feel no responsibility to the youth or to anybody but myself,” Mensa says. ” I’m like, I’ma just talk about the Xans on the plane goin’ to France. You gotta be careful about what you say because kids take what you say for real. They take it as the gospel.”

“Give ’em something they can use, not shit that’s killing them. And when we see these things happening to the young brothas — Rest in peace Juice, too early, 21 — and rap is much to blame for it.”

Mensa also admits he has come close overdosing himself.

“I’ve been through drug addiction in a major way and that shit gives you perspective,” he states. “I have a responsibility to talk about mental health, to give that to people in a real way to the people listening to my music.

Check out the full interview below.

British DJ Charlie Sloth just released a previously unseen video of Juice WRLD freestyling back in February and it shows the kid definitely had talent. He also proves his rock and punk influences by referencing Black Sabbath, Ozzy Osbourne and Tony Hawk.

Juice WRLD had just two full LPs under his belt before his death. Now, Charlie Sloth released a nearly 15-minute video of Juice WRLD freestyling over different beats. Sloth says that this freestyle is one of the best ever on the Fire in the Booth segment. Watch a clip of the freestyle below.

This is a very special Fire In The Booth and its on YouTube now!! RIP Juice!!! The greatest freestyler I ever met!!! 🙏

This is a very special Fire In The Booth and its on YouTube now!! RIP Juice!!! The greatest freestyler I ever met!!! 🙏

Check out the full video here.

What are your thoughts on Vic Mensa’s words? Let us know in the comments below!