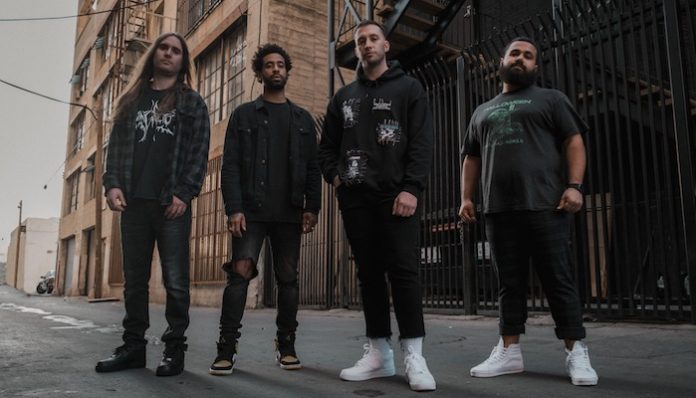 Volumes just dropped a new track off of their upcoming album on Fearless Records. The new song is called “holywater.” The other big announcement is that original vocalist Michael Barr has rejoined the band after a five-year absence.

Barr left the band in 2015, with the band citing that it was due to them traveling in different directions musically.

Just last month it was announced that Volumes had parted ways with their vocalist Gus Farias. Farias’ statement on the matter was that he did not quit and was kicked out.

“I just want to make it clear that I did not quit. I love being in the band. I got kicked out for personal bullshit, which really is bullshit. I’m gonna be the bigger man and not air out business like that. I got a check, I secured my royalties. I’m out. I’m putting me first. I’m putting everything I got into Yogi. I know what it took to get Volumes where it’s at because I had a big, big, big part in it…”

Farias previously said in 2017 that he was entering rehab following numerous close calls while using heroin and Xanax.

In an official statement back in 2015, Volumes said Barr and them parted ways due to musical differences. A part of the statement is below.

#‎VTEAM‬–while we are so fucking stoked about this upcoming US tour with Northlane along with Cane Hill and Coldrain, we regret to inform you that Michael Barr and Volumes have parted ways. Michael just was going in a different direction with his musical tastes and it just made sense to split now then continuously force something that would hold everyone back. We wish him the best of luck with his future projects.

Following his departure, Barr did exactly what he intended. The singer explored other avenues of music and ventured into a poppier, albeit melancholic sound.

But now, Barr is back and the Volumes unleashed a biting new track “holywater.” Speaking of his return to Volumes, Barr is really excited about making art with the band again and being one cohesive unit.

“‘holywater’ is a new chapter. We’re cleansing any bad vibes from the situation and the scene as well, Barr says. “It felt perfect for where we’re at. Of course, it’s about me coming back to a degree, but it’s also about us returning as a unit. We want to make genuine art. This is a taste of what we can do together. It’s the next era for the band, so you get ‘holywater.’ It’s everything we want Volumes to be in 2020”

Listen to “holywater” below.

if you hate me get in line

Tell us what you think of Volumes’ “holywater” in the comments below!