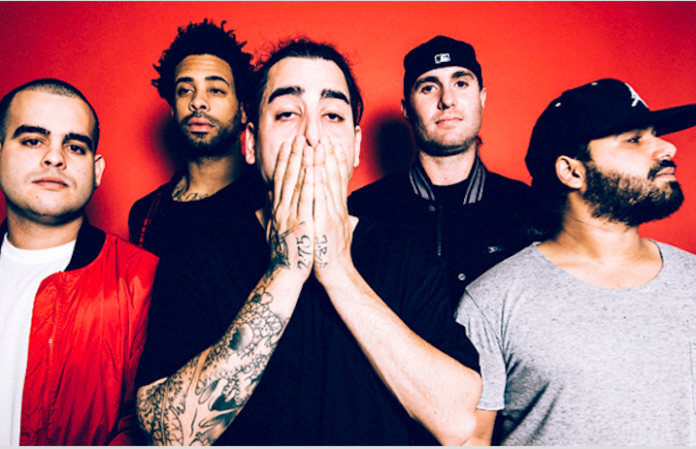 According to a report from RockFeed, it seems that Volumes had a pretty rocky weekend.

Current vocalist Gus Farias and ex-vocalist Michael Barr got into a heated Twitter discussion regarding drugs, jealousy and their past relationship with each other over the weekend, and it was quite rough.

After Gus Farias targeted Barr with a tweet regarding his take on the ex-member’s solo project, Barr responded, trying to respectfully sort out the matter, even wishing Farias the best and stating his comments were “unfortunate.”

You can read the exchange below, courtesy of theprp, who gathered screenshots of the conversation. It initially took place on February 3, and has since been deleted by both artists.

As Farias continued to pummel Barr with derogatory statements, the conversation eventually led to both artist’s commenting on the other’s drug history. Barr, who brought up Farias’ use of heroin, was then accused by Farias for his use of xanax during his time in Volumes.

As the feud boiled on, Farias’ brother and Volumes’ guitarist Diego Farias chimed in to back up his brother. He responded up on Gus’ comments about Barr’s inability to help him through his time of addiction, claiming Barr only “shaded” him while he was in the band.

Gus ripped off a couple more tweets when all was said and done, claiming all Barr ever wanted was the spotlight.

After all the tweets were deleted, Gus Farias made his own statement regarding the heated conversation.

MY APOLOGIZE TO ALL THE FANS THAT GOT OFFENDED THIS PARTICULAR SITUATION HAS A LOT OF HISTORY WITH DRAMA.

Although Barr did not respond directly, he did retweet a number of fans who supported his side of the argument, noting that he remained the bigger person. However, he did respond to some encouraging words from Issues’ vocalist Michael Bohn.

Thank you brother. I still don't understand how we have the same name basically, we should start a duo. Bohn & Barr / like Hall & Oats https://t.co/hR2p8pmBIB

Barr’s management commented further to Lambgoat in response to the situation:

“While it seems a select number of people in Volumes still are mad about my departure, I have always wished them well and will continue to do so. I had my reasons for leaving. This isn't a divorce, just a frontman wanting to pursue other things. This is the last time I will address this matter. At this point, it is a huge waste of everyone's time and energy. Especially since I have done nothing but wish them the best. I know some common sense and maturity will prevail regarding my departure two years after the fact. Thank you for all those who follow and support me. Be on the lookout for a new single soon.”

The circumstances that followed were even more unexpected.

In lieu of what fans and critics were calling immature behavior from Gus Farias, accusations began to surface from subjects who had seeked out vocal features from the Volumes’ vocalist.

According to RockFeed, multiple individuals have come forward stating that they paid hundreds of dollars for Farias’ feature on their personal music, but were stood up over long periods of time. One individual, Chris James, posted his full account of the experience on Facebook. You can read about it below.

“Hey all so just wanted to give a heads up. I gave Gus from Volumes $200 in January 2016 for a vocal feature on one of my tracks he agreed to do. He literally had from February to June to do a really short feature. He had the song and all the info.

Naturally, he became harder and harder to contact over time, and started lying to me about doing the track. At least 3 separate times he told me he was in the studio doing it, once even telling me he was “sending it to me,” and at points after that asked me to send him the song again to do it.

After June I started asking for my money back. Me in all my naivety and being hopeful to get him on a track, agreed a few different times to doing a future song. We eventually agreed to a plan where he’d give me half back until I got a new track for him.

I obviously have him way too many chances. Hit him up a few times since then, went to hit him up yesterday and see that he blocked me on Facebook. Of course he’s not answering my texts either and his phone goes straight to voicemail.

Long story short, he completely played me for my money when I was nothing but patient with him (for way too long). He’s posted statuses asking people for money for vocal features at least three times since he took mine.

Do NOT give Gus any money and don’t even contact him about a vocal feature. If you saw his recent Twitter blow up you know something strange is going on with him.

Don’t fall into the same trap. I have no idea what to do from here but I’m going to get my money eventually.

Oh yeah, I have hundreds of texts and Facebook messages, along with PayPal receipt, as proof.”

The following screen caps come from James’ direct contact with Farias, which he also uploaded in further detail in the comments of his post of the band’s wall.

Volumes responded directly to the post by James on their Facebook wall, and also released an official statement regarding the matter, claiming they will resolve any similar issues regarding Farias’ features. Another fan told RockFeed that they too had lost $300 in an effort to book Farias.

If you have arranged for vocals to be done and did not receive them, please email [email protected] with your details and we will refund you immediately via PayPal or Venmo.

The entire band sincerely apologizes for this.”

Volumes, while seemingly unaware of Farias’ inability to make good on his word, appear to be tackling the matter in the best way they know how. No members have individually made comments regarding the accusations against Gus Farias.

Volumes are scheduled to head out on The New Reign tour with Born Of Osiris beginning February 17, along with Oceans Ate Alaska, Fire From The Gods, and Within The Ruins.