Players are bringing the historic music festival back to life in the virtual game.

Since its launch last month, Nintendo‘s Animal Crossing has been the main source of entertainment for many of those quarantining during the COVID-19 pandemic. With some extra time on their hands, players have started to get creative in the virtual universe.

From learning how to play Fall Out Boy‘s “Sugar, We’re Goin Down,” My Chemical Romance‘s “Welcome To The Black Parade” and many more, music fans are finding new ways to incorporate their real-life interests into the game. So much so that players are starting to create a new Animal Crossing: New Horizons trend that is taking us back to the nostalgic days of Warped Tour.

Animal Crossing players are taking to Reddit and Twitter to share their latest Warped Tour creations. From fully equipped merch tents and stages, fans are keeping the Warped Tour dream alive in the virtual game.

Twitter user Deirdre (@BEATSBYDEIRDRE) shared their virtual Warped Tour set up earlier last week. Designing merch tents for State Champs, the Maine, Trophy Eyes, Between You & Me, Doll Skin and more, Deidre explained that the decision to design their own Warped Tour on Animal Crossing came from missing the tour which had its final cross-country run in 2018.

“Perhaps I miss warped tour so I decided to make my own,” Deidre shares.

Perhaps I miss warped tour so I decided to make my own pic.twitter.com/8IRFtWrgMW

Read more: Here’s how over 800 music venues are joining together for financial help

The virtual Warped Tour Deirdre created has caught the attention of a few bands including Between You & Me and Warped alumni Grayscale.

Between You & Me were excited to see their very own merch tent in Deirdre’s virtual Warped Tour.

“BYAM @ WARPED. What a sight that is,” the band share.

BYAM @ WARPED.
What a sight that is!

Animal Crossing players have also turned to Reddit to share their creations. For u/drunkxpunx, they decided to go all out for their virtual Warped Tour, creating numerous merch tents and even a fully equipped stage. With blink-182 set up as their virtual Warped Tour’s main headliner, A Day To Remember, My Chemical Romance and Mayday Parade are some of the bands that also have their own merch tents.

“Sorry if post is not allowed but wanted to share with someone,” drunkxpunx shares in their post. “Also got some merch stalls for ADTR, MCR, Mayday Parade. and more.” 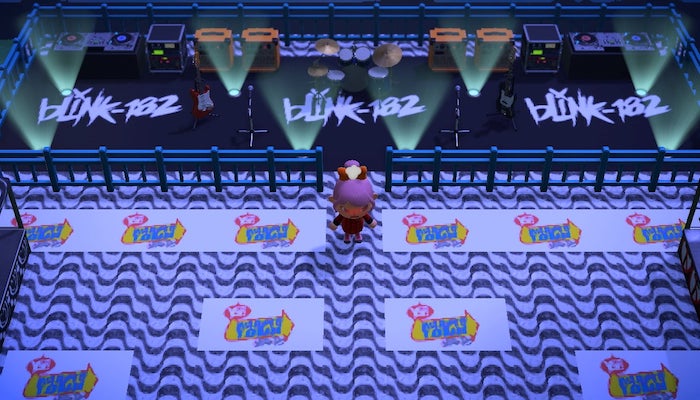 Along with music fans, artists have also been on the Animal Crossing craze. Recently, blink-182‘s Mark Hoppus has been hosting his own Animal Crossing: New Horizons live streams where he performs some songs while his son plays the popular Nintendo game.

What do you think of the latest Animal Crossing Warped Tour creations? Let us know in the comments below!