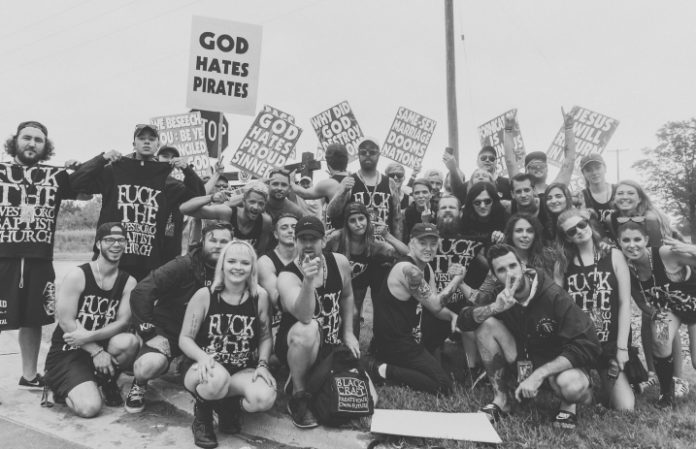 Warped Tour hit Kansas City today, and they caught word that the Westboro Baptist Church, which is known for its homophobic and racist remarks, would be protesting the event. So, the Warped Tour crew decided to protest the organization in the best way.

Check out some of the incredible photos below!

Not only did they crash the protest, but Black Craft Clothing had some seriously sick tees for the Warped crew to rock:

Bryce Hall captured some of the best photos of the Warped Tour crew coming together to stand up to the Westboro protesters. Check those out here:

This morning our community took a stand. A stand against people discriminating against other human beings. We all belong here. We all matter. Stand against hate.

Not to mention, Garrett Russell of Silent Planet had an incredible response, saying he’d be sharing fried mini donuts and Monster water (hoping maybe they’d grow up and just read or vape, as one does):

Or maybe I'll give them a can of monster water. I'm pretty sure that would offend them, but they'll need water to wash down the mini donuts.

Once they experience fried mini donuts and water from a monster can, maybe they'll grow up and do something cool instead. Like read or vape?

And check out some of the other incredible responses in protest to Westboro’s Warped Tour appearance below:

Josh James, Stick To Your Guns:

Westboro Baptist Church showed up to Warped Tour. I was told to stop fornicating w/ men. Not sure who she thought I was. ¯_(ツ)_/¯ pic.twitter.com/1kJ1w8aXSb

Mason Marble, Too Close To Touch:

What should I yell at the Westboro Baptist Church today?

Kelen Capener, The Story So Far:

What are your thoughts on this epic standup? Let us know in the comments!