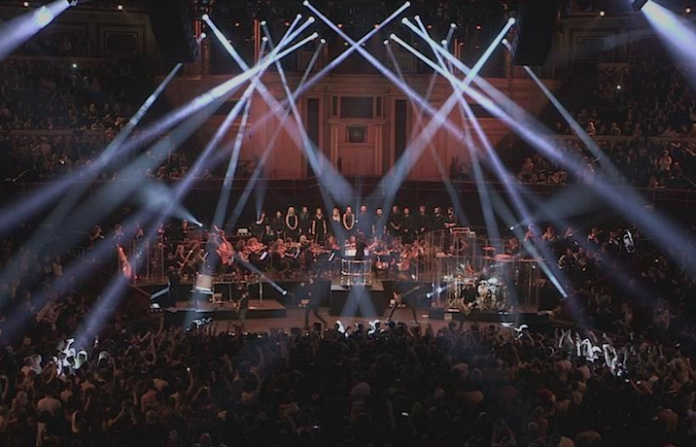 Today (Dec. 2), Bring Me The Horizon released the live DVD of their set at London's Royal Albert Hall, benefiting the Teenage Cancer Trust.

Watch them perform “Happy Song” with a live orchestra and choir (and host “the first wall of death the Albert Hall has ever seen”) below.

The event was held on April 22 and was part of the Teenage Cancer Trust's series of performances at the famous London venue—which, in the past, have feature the likes of Paul McCartney and the Who.

According to its website, Teenage Cancer Trust creates “world-class cancer services for young people in the UK, providing life-changing care and support so young people don’t have to face cancer alone.” The group raises 16 million pounds to help young kids facing cancer in the U.K.

Grab Live At Royal Albert Hall here in a variety of formats, including a two CD/DVD set, a triple vinyl and a five disco photo book, now. Watch a teaser of the DVD here.

Bring Me The Horizon dropped their previous live DVD in June 2015. It was recorded at Wembley Arena with support from Young Guns, Issues and Sleepwave in Dec. 2015.

What do you think of the orchestra performances? Let us know in the comments.

And here's a previously released performance of “Doomed” from the event, too: