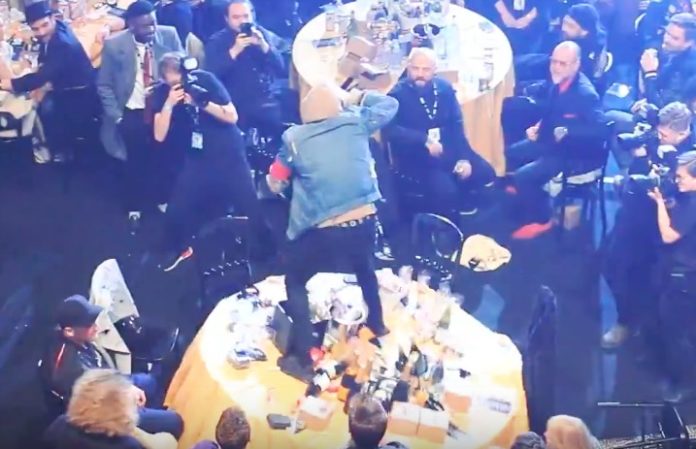 Bring Me The Horizon’s Oli Sykes toppled Coldplay’s dinner table during the band's performance at the NME Awards Wednesday night.

In the fan-shot video you can see below, you can see Sykes descend from a balcony area directly towards Coldplay’s table, and then jump onto it, eventually knocking it over. Bring Me The Horizon won NME's Innovation Award at the event.

Recently, there has been controversy regarding similarities between the artwork for Bring Me The Horizon’s Sempiternal and Coldplay’s A Head Full Of Dreams.

When the cover for A Head Full Of Dreams was first revealed, Sykes responded in a since-deleted tweet that read, “@coldplay Jackin our steez hard.”

In a more recent interview, Sykes furthered his thoughts: “At the end of the day it’s not our symbol, it’s a very old symbol. They might not have known at first, but obviously if you Google ‘flower of life’ the first thing that comes up is ‘Bring Me The Horizon—Sempiternal,’ it’s like, if you Google the images, someone’s gonna have said something to them, so whether it was intentional or not, it is the same.”

When it was first revealed that Coldplay would be using the symbol for their cover, many BMTH fans stood on Sykes’ side.

What do you think? Are the covers too similar? Or, due to the fact that the symbol was around before either band were conceived, does it even matter? Let us know your thoughts.