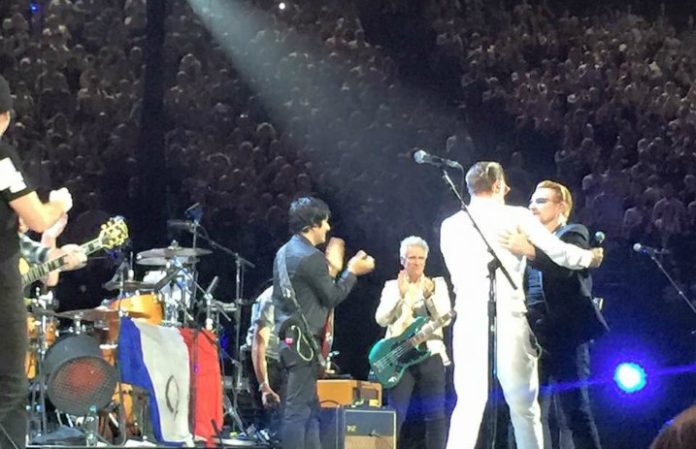 Eagles Of Death Metal made a surprise appearance Monday evening at U2’s concert in Paris. This was their first time onstage since their show at Le Bataclan where three terrorists massacred 89 people less than a month before.

Like many bands, U2 postponed their Paris dates following the tragedy, which had been rescheduled for Sunday and Monday at the indoor AccorHotels Arena. On the day after the attacks, the Irish band joined mourners to pay tribute to the victims at Le Bataclan.

Over the weekend, leaked information started spreading that Eagles Of Death Metal would return to Paris to play with U2. The live appearance didn’t end up happening Sunday, a fact they confirmed before the show on their website: “We're back in Paris and it's great to be here. Some people have been saying that Eagles of Death Metal will appear on stage with U2 tonight. This is not the case. We have another surprise guest planned for tonight's show,” the note read. The guest was actually Patti Smith, who performed her song “People Have The Power” with Bono and crew and dedicated it to the victims of the attacks.

It was only on Monday night that Eagles Of Death Metal, still without Josh Homme, ended up joining U2 onstage at the very end of the night for the same Patti Smith cover as well as their own song “I Love You All The Time.” Frontman Jesse Hughes performed in the white suit at the front of the stage and the band finished the show on their own to salute the audience with their sound engineer, also a survivor of the attacks. The entire show will be aired on HBO at 9 p.m. EST.

U2 have been said to be active supporters of Eagles Of Death Metal since the shooting at Le Bataclan. Different sources mentioned that the Irish band gave their American peers access to their plane and bought them new cellphones on the night of the tragedy.

In their first interview after the Paris attacks, Eagles of Death Metal’s vocalist, Jesse Hughes, expressed his desire to go back to Paris. He also said he wanted to be “the first band” to play Le Bataclan “when it opens back up.”

Video: #EODM covering “People Have The Power” by Patti Smith with #U2 in Paris https://t.co/5a1EcW3W6I