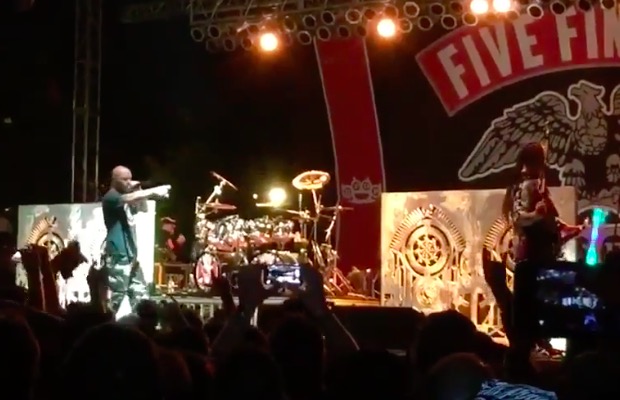 Last night, during their performance at Beale Street Music Festival in Memphis, Tennessee, the members of Five Finger Death Punch had an extremely embarrassing meltdown on stage. Thanks to fan-shot video footage, we can see singer Ivan Moody awkwardly standing on stage after the remaining members of the band stormed off. According to Blabbermouth, they stumbled through about six songs before leaving the frontman to fend for himself.

Despite rumors of FFDP's demise, Ivan has released an official statement on the events that took place last night, apologizing and reassuring fans that they are not going anywhere.

You can read what he had to say and check out some videos of the meltdown below.

“There were a lot of technical problems last night that were seemingly unsolvable. We had to make a decision whether to hit the stage crippled, without being able to hear ourselves; or, delay the start of the show – possibly for hours.

We decided to proceed, but not being able to hear if I was in key, and just guessing where we were in the song frustrated me to the point that I lost my cool.

I'm not saying I handled it appropriately. Matter of fact I've never been so embarrassed before. I apologize for taking out my anger on stage. You guys know me and you know how I pride myself on my live performances. I'd never want this to boil over in to something that epically wrong ever again.

To some of our crew, good luck in your future endeavors we wish you the best – we also welcome our new monitor engineer Paul Weber.

To our fans in Memphis – we'll make it up to you I promise, Houston we we will see you tonight. The rest of the world – yes we are coming.

And to the haters… wipe that smirk off your face …We are not going anywhere … This “ain't my last dance!”

We GOT YOUR SIX”