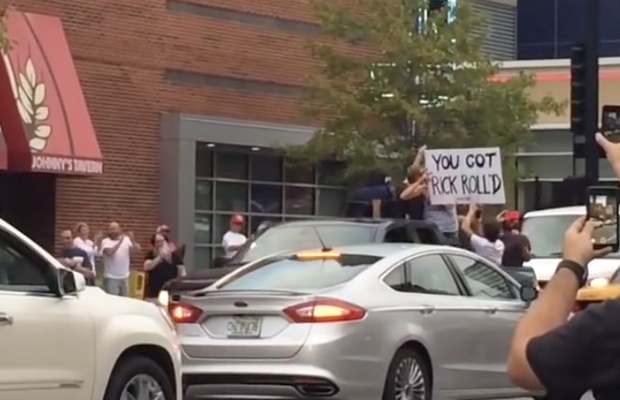 In case you are not already aware, Foo Fighters and the homophobic Westboro Baptist Church have a bit of a rocky history—largely due to the band's tendency to make the church look foolish during their highly controversial, anti-LGBT protests. Foo Fighters made headlines in 2011 when they responded to the protestors in the best way possible: rolling out in front of the protest on the back of a flatbed truck, dressed in stereotypical cowboy attire, and playing a song they wrote for the occasion called “Keep It Clean,” which includes lines like “I think I'm in the mood for some hot man muffin.” Naturally, the internet exploded, and the Foos were crowned by the masses for taking on the hate group.

Now, four years later, the Westboro Baptist Church has come back to picket a Foo Fighters show, and the band decided to mess with them again.

Check the fan-shot video below of Dave Grohl and company rolling up to the picket in the back of a pickup truck, blaring Rick Astley's “Never Gonna Give You Up” at full volume to drown out the noise of the protesters. If there's a lesson here, it's “don't mess with Foo Fighters, because the Foo Fighters will rickroll you and make you look like a fool.”