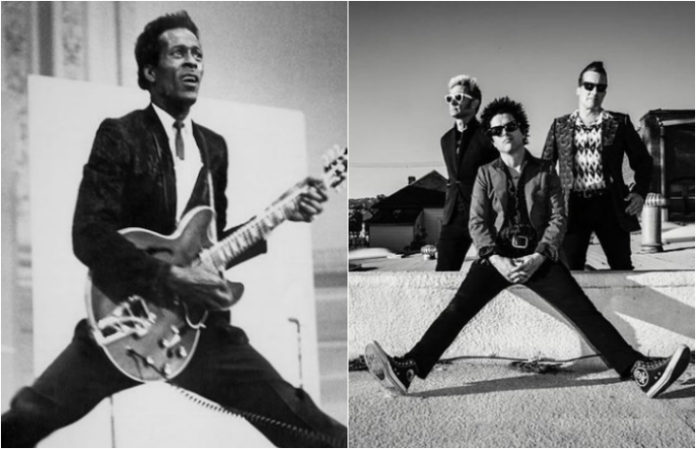 At their gig in London, Ontario, Green Day paid tribute to the late Chuck Berry with an incredible cover of Berry’s “Johnny B. Goode.”

Check out the iconic tribute performance below.

Rock legend Chuck Berry passed away on Saturday, March 18 after being found unresponsive in his home.

Berry is labeled as one of the founders of rock and roll and has influenced such as the Beatles, the Beach Boys and the Rolling Stones, and his hit songs include “Rock and Roll Music,” “Johnny B. Goode,” “Roll Over Beethoven” and “Maybellene.”

He was inducted into the Rock & Roll Hall of Fame in 1986 and was set to release his first album in 38 years in 2017. According to Uproxx, Berry’s family revealed that Berry’s last album will still be released, with details to come later this week. He had originally announced his new album, Chuck, on his 90th birthday, back in October 2016.

Check out Green Day’s cover of the 1958 hit below:

And listen to the original song below:

In addition to their incredible cover, Green Day also launched the #StillBreathing campaign, asking fans to show what that phrase means to them. Fans are encouraged to share a photo with the hashtag and their country’s flag emoji.

#StillBreathing all over the world! Make your voice count! check out https://t.co/Yuiyrxnp0O

What are your thoughts on Green Day's cover? Let us know in the comments below!