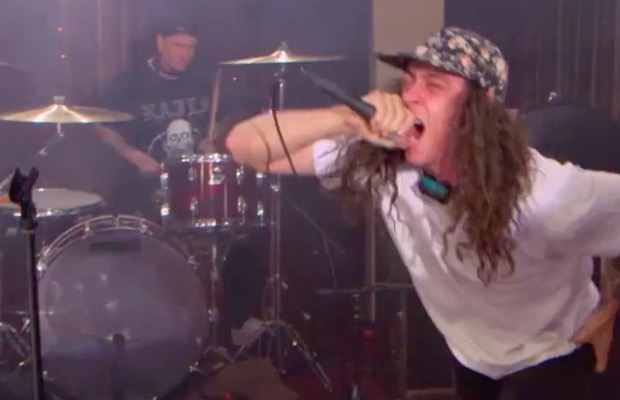 Los Angeles, CA's Trash Talk recently made an appearance on Adult Swim's The Eric Andre Show, which is where they proceeded to slap volume-sensitive shock collars around their necks and attempted to perform a song. Instead of us trying to explain the pandemonium that ensued, you can watch it for yourself below.

Wondering what kind of things take place at Trash Talk shows? Well, this fan urinated into his own mouth (NSFW).

Trash Talk have become somewhat known for the crazy and unique happenings that go on at their shows. For instance, bassist Spencer Pollard knocked down a flying video drone with a beer can during a set they played in Michigan this past August. Additionally, New York City mayor Bill de Blasio and his wife, Chirlane McCray, attended one of the band's shows.

Have you ever seen Trash Talk before? Did anything out of the ordinary happen?