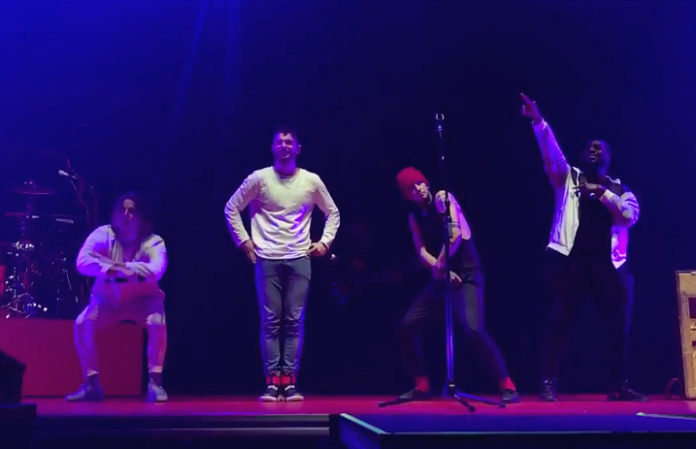 Yep, you read that right: Twenty One Pilots, Jon Bellion and Judah & The Lion teamed up over the course of the Emotional Roadshow Tour to cover Black Eyed Peas’ “Where Is The Love?”, and it’s as incredible as you would think it’d be. Plus, it looks like the Black Eyed Peas agree.

Check out the footage below!

The Black Eyed Peas shared the video, saying “This is tight. We see you.” And we couldn’t agree more.

The three bands have been performing the Black Eyed Peas cover on the Emotional Roadshow Tour, which wrapped up its US leg in Louisville, KY on March 4.

Check out a list of the remaining cities and dates in New Zealand and Australia below!

And if you want to see their full live performance of “Where Is The Love?”, check it out here:

In addition to wrapping up their hugely successful American leg of the Emotional Roadshow Tour, Twenty One Pilots’ “Heathens” has been continuing to break records. Billboard reported last month that the song has spent 28 weeks at No. 1 on the Hot Rock Songs chart, breaking the record previously held by Walk The Moon’s “Shut Up And Dance.”

What do you think of the Black Eyed Peas cover? Let us know in the comments below!