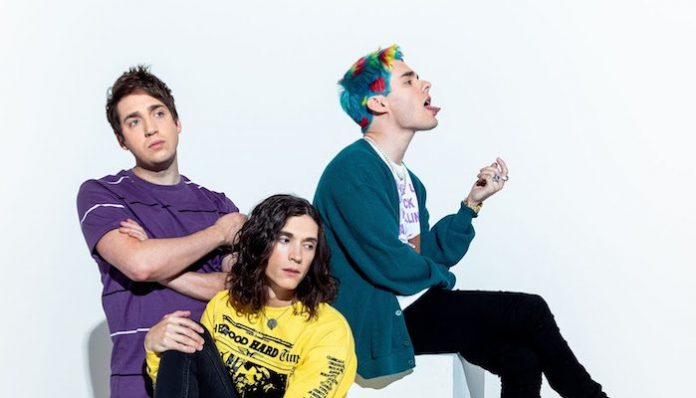 The news Waterparks fans have been waiting for has finally arrived.

On Thursday, the trio confirmed their highly-anticipated new album is finally on the way. As well, listeners don’t have to wait too much longer to hear Waterparks’ new single “Snow Globe.”

Read more: guccihighwaters digs up the past in video for nothing,nowhere. collab—watch

All the way back in September, Awsten Knight confirmed the end of the FANDOM era was near when he chopped off his iconic green hair. Soon after, Waterparks dropped their latest single “Lowkey As Hell.” The track is the band’s first release since the debut of their third full-length album which was later accompanied by remixes of “Dream Boy” and “Telephone.” Waterparks even gave the FANDOM era one last encore with their live album FANDOM: LIVE IN THE UK.

Since all of this, there’s been a lot of speculation surrounding Waterparks’ follow-up to FANDOM. Earlier this week, the trio seemingly confirmed the name of their new album in a social media post. The short clip features a bright orange liquid absorbing the vibrations of an unheard song. The post’s caption caused many fans to believe the new album is called Greatest Hits despite some theories the LP’s name may actually be Graffiti.

Now, Waterparks have finally confirmed that their fourth studio album is truly called Greatest Hits. As well, the LP is officially arriving on May 21. On Thursday, the band debuted the album’s bright cover art that features the members in matching orange attire similar to the color seen in their cryptic social media video.

Although the release date for Greatest Hits is a couple of months away, fans don’t have to wait much longer to get another taste of it. Waterparks’ new single “Snow Globe” officially debuts at midnight this Friday, Feb. 26.

SEE YOU IN THE FUTURE pic.twitter.com/Z51T0PU9Ez

As it turns out, Waterparks gave a subtle hint about the single on their official website. Along with Greatest Hits splashed across the landing page, snowflake flurries welcome fans to the website which leads to the pre-save link for “Snow Globe.”

Last month, Awsten Knight told Kerrang! that Greatest Hits has had some mixed reactions so far. Despite this, Waterparks are just glad they were able to experiment more on this new album and create a final product they are proud of.

“It’s different,” Awsten said. ​“A couple of people have been like,​‘Man, I’m nervous… some of this stuff’s really weird…’ But other people are like, ​‘Holy fuck, this is by far the best!’ It’s for sure the most experimental so far….The thing is, no-one’s just like, ​‘Okay.’ They’re like, ​‘What the fuck?!’ or, ​‘This is my favorite!’ It’s definitely gonna divide people, for sure. But if you’re making art that’s not poking a little bit, or at least making people think, ​‘Oh my god, what do I think about this?!’ then you’re kind of fucking boring.”

While we wait for “Snow Globe” to arrive, the video for “Lowkey As Hell,” which is on Greatest Hits, is available to stream below.

What are your reactions to Waterparks announcing their new album? What do you expect “Snow Globe” to sound like? Let us know in the comments below.