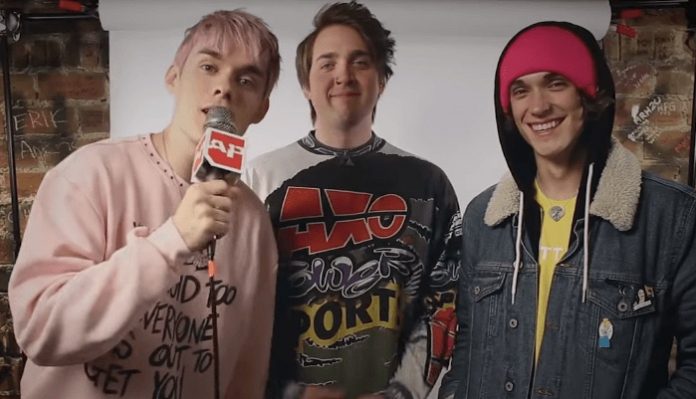 Despite allegedly scrapping their last rumored album, Friendly Reminder, fans can most likely expect new music from Waterparks in the near future.

The band shared news of a new record deal via Twitter yesterday, sparking a heated discussion concerning which label the band partnered with going forward.

Frontman Awsten Knight made his own announcement as well, along with a warning to those who cross his path at airports.

ALSO WE SIGNED A NEW RECORD DEAL,” the tweet reads.

It still isn’t confirmed who the new record label is, or if the band simply stayed with Equal Vision Records. Either way, fans are eagerly waiting to find out who will be putting out the next Waterparks album.

The last news of fresh music from Waterparks were inspired by Slam Dunk Festival a few weeks ago, where they teased a possible new song at their upcoming set.

A very cryptic and confusing tweet posted by the band last month ignited theories consisting of constellations and fruit bowls.

Waterparks then dropped a new tweet that looked more like one of those math equations we all dreaded.

Slam Dunk takes place Saturday, May 25 in Leeds and Sunday, May 26 in Hatfield where Waterparks are set to play the Monster Energy stage.

Hopefully the new record deal will lead to an album sooner rather than later, but fans will be anxiously awaiting more news to come.

Who do you think Waterparks signed with? Sound off in the comments below!