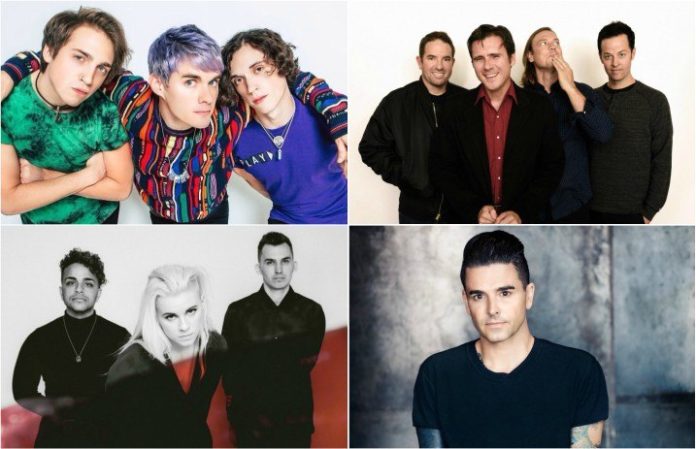 Waterparks release new song “Not Warriors,” Jimmy Eat World will play at Forecastle and other news you might have missed today!

Read More: Everyone thinks the new Chainsmokers song sounds like Twenty One Pilots

Waterparks released their song “Not Warriors,” taken from their new album Entertainment. We have Entertainment on our most anticipated releases of 2018, and it should be on your list, too! Preorder this pop-rock album here.

Louisville we're coming for you! Catch us at @forecastle in July. Tickets & Info: https://t.co/rgPofP32Vp#forecastle pic.twitter.com/n89LkMzRSk

Catch Jimmy Eat World this July 13-15 in Louisville, Kentucky for the Forecastle Festival, along with several other artists. Tickets on sale Jan. 19 here.

Watch folky new video “uuu” from Field Medic's album Songs From The Sunroom. If you want to buy the album, or maybe a T-shirt, click here.

With their new album Crooked Shadows coming out Feb. 9, Dashboard Confessional played “We Fight” live on Conan. Be sure to check out their upcoming tour dates here.

Good Tiger's new video for “Salt Of The Earth” is taken from their upcoming album We Will All Be Gone, which will be released Feb. 9. Preorder one of our most anticipated albums of 2018 here.

We are very pleased to announce that we have signed a record deal with Good Fight Music and eOne Music. New… https://t.co/aDOcatOuBl

New metal band Skyharbor signed to Entertainment One/Good Fight Music for their new full-length album Sunshine Dust. This full-length will follow 2014's Guiding Lights Check them out on tour this spring with the Contortionist, Silent Planet and Strawberry Girls.