They hit the road with Motionless In White this Friday.

We Came As Romans are teasing fans with promises of new music soon, and we just can’t wait to hear it.

The band also revealed that when they dropped the new stuff, it might be more than just one song. We cannot contain our excitement.

Back in April, the group revealed they were writing the followup to 2017’s Cold Like War. They also discussed how the record will address the passing of vocalist Kyle Pavone, who died in August 2018.

“We’ve been throwing a few demos around,” vocalist Dave Stephens told Billboard. “I love that we’re going into the studio with so much to write about and something that hits home for all of us so hard. We’ve never had something so terrible happen, and I think it’s going to be therapeutic to write about it and be together and go through the whole process. I’m actually really looking forward to it.”

While they have been at work on new tunes, there’s also some material Pavone was writing prior to his passing that could make an appearance, according to Stephens.

“He was always writing, and I’m pretty sure he gave Lou [Cotton], our guitarist, a few different things he wrote,” he says. “We’re gonna try and get into his laptop, too, ‘cause I’m sure he had just files and files and files of stuff there, too. So that’s a goal. We would love to include him in this record as much as we can, aside from just writing about him.”

We knew the band was planning on spending part of their summer in the studio, and now it looks like we’ll get to hear some of what they’ve been working on very soon.

First, they asked fans if they’d like for them to drop a brand new song.

would any of you like to hear some new music from us?

like, do you want us to drop a brand new song?

does anyone want us to do that?

Then, they decided to make a Twitter poll to see if fans would be OK if they dropped more than one new track. To no one’s surprise, most people seem to agree with us that the more new music from We Came As Romans, the better.

what if i told you that we recorded more than just one song…?

do any of you think that you could handle that? or is that just too much new music for you?

We Came As Romans also posted on their Instagram story to reveal that the new stuff is coming this week. They also asked fans if they’d prefer one new song or two. 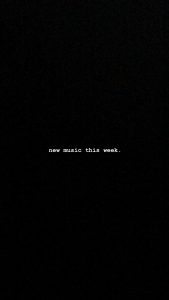 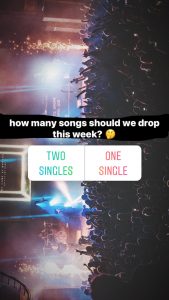 It also seems as though the new song might be released with SharpTone Records, a first for the band. The record company posted a tweet telling fans to tell We Came As Romans that they want to hear new music, so it seems likely.

The band will be joining  Motionless In White on their Trick ’r Treat tour alongside After The Burial and Twiztid that kicks off this Friday. Grab tickets here and check out the full list of dates below.

How excited are you for new music from We Came As Romans? Sound off in the comments down below!