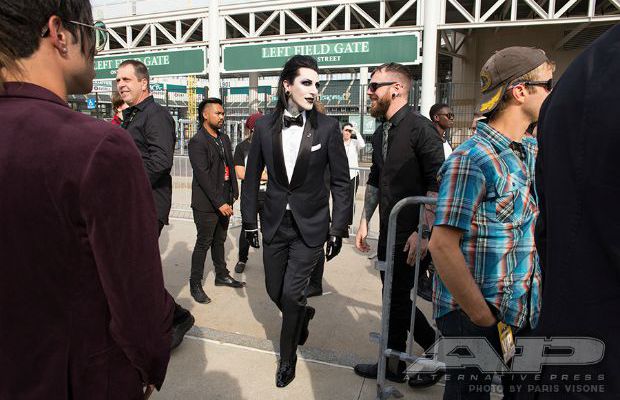 Beyond the performances, presentations and the occasional resurrected beef, there were many other moments that our cameras didn’t catch at the Alternative Press Music Awards. Here are a selected few.

Chris Motionless’ big ticket item
If you follow this purveyor of goth chic on Twitter, you might have caught this one— Chris Motionless threw down $7000 for a new Tom Ford suit to wear to the awards. Not only that, but he bought the style the designer originally crafted for James Bond in Skyfall. When we asked him about his high fashion purchase backstage after Motionless performed with Rob Zombie, he was not-so-pleased to inform us that he wasn't actually wearing it onstage, nor in our Gibson Backstage Lounge interview. So, no. The suit you see in the band's performance is not THE James Bond suit, but another he wasn't afraid to rip if things got rowdy.

I may have pulled the trigger and bought my dream tuxedo to wear at the #APMAs. Let's hope I look half as good as 007 himself ��. Only 2 weeks to go! #Skyfall #JamesBond #DanielCraig

Check out Chris' outfit, as well as our other favorite looks from the show.

Panic! At The Orchestra
At rehearsals the night before the APMAs, Urie spent a quiet moment with an unlikely companion—Liza Grossman, the conductor of the Contemporary Youth Orchestra. In his cover story in AP 325, Urie spoke about how honored he was to perform with the young musicians at last year’s APMAs, citing his own background in youth arts programs in high school for keeping him “sane.” “It really brought me back to my days in orchestra and in band. It was a really touching thing to be on the other side of that—to be this older guy who’s looking back.” On Tuesday night, Urie got another chance to interact with the Orchestra when he studied the collective’s songbooks for the show with Grossman, discussing arrangements and catching up.

Metrogate, Part II
Ah, the neon-pop throw down no one knew was brewing. After calling out All Time Low for being “disrespectful” when the two bands toured together (which was in 2009, in case you were wondering), the drama continued backstage. Trace Cyrus of Metro Station and Alex Gaskarth argued away from the cameras, until photographers and band personnel stepped into prevent fisticuffs. Trace then went on an hours-long social media rampage that included a parking lot video inviting his enemies to “get in a boxing ring”…after they signed a waiver.

Hayley has an Iconic moment
After winning the award for Best Vocalist, Hayley Williams had just finished getting her photos taken in the backstage studio when APMA’s Icon Award recipients X walked in. A big fan, Hayley asked if she could have a photo with the punk/rockabilly legends, who happily obliged.

Cool, Corpse-y and Collected
PVRIS vocalist Lynn Gunn divulged her makeup secrets to our resident lipstick enthusiast APTV Manager Cassie Whitt on the red carpet. If you love that corpse-y nude lip she was rocking, look no further than Coloured Raine Liquid Lipstick. You're welcome. “I like how dead it looks,” Gunn said.

Is This The Real Life?
During Brendon Urie’s epic rendition of the Queen classic “Bohemian Rhapsody,” Pierce The Veil's Vic Fuentes could be found swaying with arms around friends as the guitars crescendoed. After Urie hit a crisp high note, Vic pulled out a lighter and sang along even louder.

World’s Strangest Track Meet
There were other clashes of ego on Wednesday night, but this one was of the lighter variety. After traversing the red carpet, MGK and Mod Sun—clad in an orange jumpsuit and tie-dye pants, respectively—decided the best way to enter the Q would be by a good old-fashioned footrace—with a little epic arm flailing for good measure.

Arena Antics
When technical difficulties briefly delayed the beginning of the show, the fans and VIPs started a wave around the stadium to pass the time—at one point, they even got the Contemporary Youth Orchestra to join in.

Black Lung Brides
Andy Biersack was feeling under-the-weather, telling APTV correspondents Nick Major and Caity Babcock he’d taken so much medicine for his illness that he “literally [couldn’t] see right now” on Periscope. Jokes aside, Biersack still managed to slay the Black Veil Brides set, with no perceivable damage to his own “Rebel Yell.”