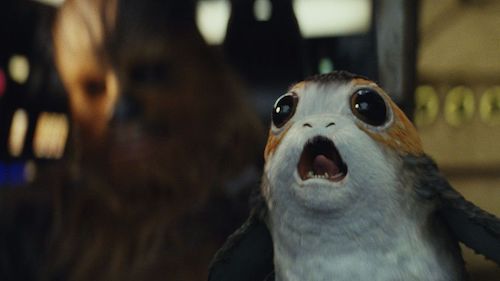 There were so many puffins on the Irish island that served as a  filming location for Star Wars: The Last Jedi that it was easier to include them in the story than to get the birds digitally removed.

Read more: Porgs singing the ‘Star Wars’ theme song is as cute as it sounds—listen

Thus, Porgs were born. (And we are really thankful they exist).

“Rian [Johnson, director] had gone to shoot this sequence on Skellig Michael, which is the real island location that stands in for Ahch-To, and that island is covered in puffins. It’s a wildlife preserve and everywhere you look there are hundreds of birds dotted around the landscape,” creature concept designer Jake Lunt Davies explained during an interview with StarWars.com. “You can’t remove them. You physically can’t get rid of them. And digitally removing them is an issue and a lot of work, so let’s just roll with it, play with it.”

At firrst, the idea was for them to become “puffin people,” an indigenous species from the island. After a few drawing attemps, Davies created the porg.

“I did about four or five pages of totally different sketches, and the porg was probably in one of those sketches. It was influenced by a seal and a pug dog and the puffin. The big eyes of a seal or the big eyes of a pug dog and the sort of funny, ugly face [of a pug],” he says. “There’s something incredibly appealing about it. Maybe it’s the big eyes. But like a pug, porgs have this very sort of sad, neutral face.”

Davies also shared he was really surprised when the first Star Wars: The Last Jedi was released and “the Internet goes crazy for it and it turned into a meme fest.”

Not that he's complaining: “It’s amazing. I’m sort of blown away.”