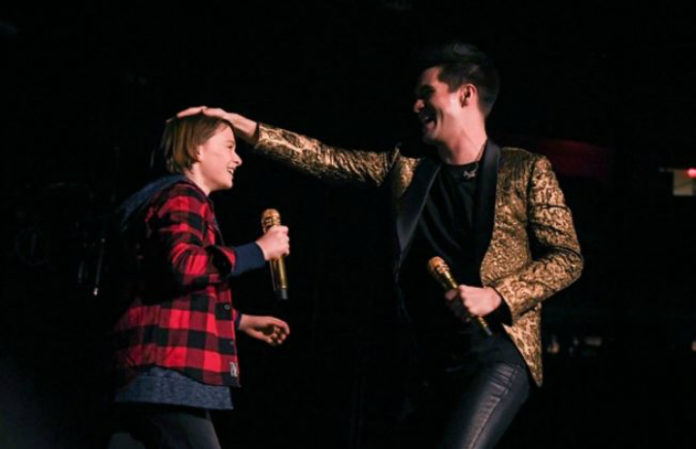 There's not many things better than getting to see Panic! At The Disco live. Add in the fact that last night they performed at Madison Square Garden and it gets even better. But last night's performance had a special guest that everyone was talking about.

Check out clips of Stranger Things star Noah Schnapp performing with Panic! below!

The Stranger Things star may be the biggest Panic! fan we know which only makes us love him more. Schnapp starred in Panic!'s video for “LA Devotee” and even alluded to this live performance back in September when the video first dropped.

We all lived vicariously through Schnapp as he posted a picture hiding under the stage while Panic! performed, joking that he looked “like I just saw the demogorgon” Demogorgons… Performing in front of a sold out Madison Square Garden.. Same thing!

Hiding under the stage waiting to join @PanicAtTheDisco . I look like I just saw the demogorgon �� pic cred brendan walter pic.twitter.com/8XGpu004QO

And finally it was time and just as Panic! was about to perform “LA Devotee,” Schnapp came out and the crowd went wild. Check out some videos below!

Noah Schnapp performing on stage with Panic! At The Disco (March 2nd) pic.twitter.com/pYMU67Xza2

Schnapp looks right at home on stage with the band making us think he should be added as an official member to the group!

Noah Schnapp performed on stage with the band “Panic! At The Disco” at Madison Square Garden in New York! (March 2nd) pic.twitter.com/OqHc0Mu6gf

Noah Schnapp is officially cooler than all of us and we are perfectly okay with that!

Watch more: 10 Things You Didn’t Know About Panic! At The Disco