The 50th anniversary event will break down into four stages.

Just over a week ago, Woodstock revealed a massive lineup for their 50th anniversary event. The bill received a very divided reaction from fans who expressed concerns over the shift in genre. Now, the stage-by-stage breakdown of the three-day festival has been revealed, pairing most like-minded acts together with a few interesting exceptions.

Check out the full breakdown below.

Woodstock will feature four stages: The Peace Stage, The Love Stage, The Music Stage and The Garden Stage.

Stages have been divided into (mostly) similar acts, leading up to that night’s headliners.

The Killers, Miley Cyrus and Santana will headline on Friday, and honestly, we’re just extremely amused that FEVER 333 will be able to say they’ve shared the stage with Miley Cyrus.

Saturday’s headliners include Dead & Company, the Black Keys and Chance The Rapper—and no, Greta Van Fleet will not be performing on the same day as Robert Plant.

The final day brings Jay-Z, Imagine Dragons and Halsey in as our big hitters. The Music Stage that day is the best place to be for a lineup that’s a bit all over the place. Halsey will headline, while acts such as Pussy Riot, Brandi Carlile and Earl Sweatshirt lead up to the night’s event.

Check out the full four-stage breakdown below. 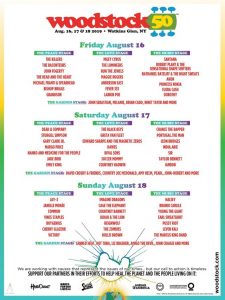 While the lineup overall has amassed quite a few disappointed classic rockers, Halsey seems to be honored to play such a staple in the music community.

“The Woodstock lineup seems to be a bit divisive, but I am very honored to be included in a lineup of artists who all appear to be constantly influencing culture or representing social activism,” Halsey says in a tweet. “Using their voices. That’s Woodstock to me. I’m honored and I can’t wait.”

The Woodstock lineup seems to be a bit divisive. but I am very honored to be included in a lineup of artists who all appear to be constantly influencing culture or representing social activism. Using their voices. That’s Woodstock to me ? I’m honored and I can’t wait.

That said, many people have shared their own thoughts on the festival’s lineup. While some think Woodstock has done a wonderful job of representing artists of all genres in 2019, others think the festival has strayed from its roots and become a cash-grab.

What do you think of this year’s Woodstock lineup? Sound off in the comments below.