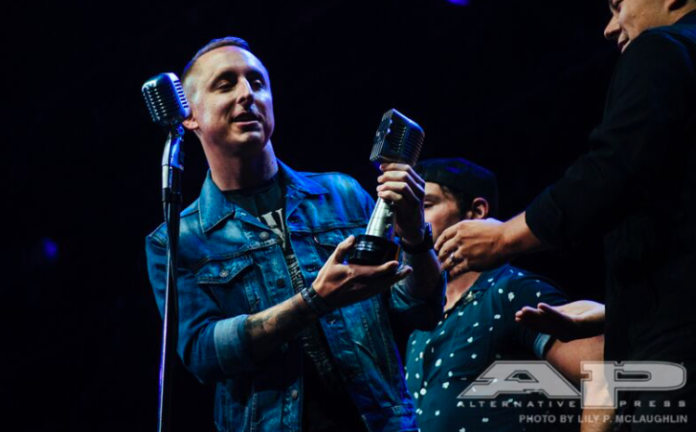 Yellowcard were honored with the first Vans “Off The Wall” Award at the 2016 Journeys Alternative Press Music Awards, Fueled by Monster Energy.

“Thank you so much to Vans and AltPress for giving us this incredible honor. We want to thank everyone at Hopeless Records for helping us put together this final chapter of our career. We are the luckiest dudes,” Yellowcard says during their acceptance speech.

This year marks the 50th Anniversary of Vans Sneakers. To mark this milestone, the iconic brand has teamed up with Alternative Press to create a new award saluting bands that exhibit and inspire creative expression.

Since 1997, Yellowcard have always played by their own set of rules while creating an impressive legacy of pop-punk anthems, catchy choruses and, of course, violin.

They recently announced that their forthcoming self-titled album (pre-orders are on sale now) and world tour will be their last.

“We have been on the road. We have played shows on six continents… It’s what it’s really about so you guys and supporting our band for almost twenty years,” Yellowcard continues. “All I can say is thank you so much for almost two decades of love and support. We hate to say goodbye, but we promise to do it right.”