You can now wear that inauguration meme wherever you go.

On Jan. 20, Joe Biden was officially sworn in as the 46th President of the United States. Although his inauguration was historical in a multitude of ways, the ceremony caught the internet’s attention for plenty of other reasons. A slew of memes from the event emerged online including a popular one of Bernie Sanders.

Now, the Senator has shared his thoughts on the viral meme and revealed how he is using it to now help charity.

From Lady Gaga to the Hunger Games, Star Wars and even the Jonas Brothers, Joe Biden and Kamala Harris‘ inauguration inspired a slew of memes and chatter on social media this week. Although The Simpsons fans noticed an eerie similarity between a 21-year-old episode and Harris’ outfit, it was Senator Bernie Sanders who truly captivated the internet’s attention.

During the inauguration, a photo of Sanders bundled up for the winter weather while social distancing was taken. The image, snapped by Brendan Smialowski for Getty Images, quickly spread on the internet and sparked a lot of reactions. As a result, the Senator began trending on Twitter as individuals got creative with Photoshop and tweets.

bernie sanders watches as jason derulo falls down the stairs at the inauguration! pic.twitter.com/fOdPwuhgGY

Bernie dressed like the inauguration is on his to do list today but ain’t his whole day. pic.twitter.com/wCRyoxU3V2

“This could have been an email.” #BernieSanders pic.twitter.com/NaGYQwY4bU

Since everyone is doing it… TM8 pic.twitter.com/EKbBPPXPbC

Read now: Alex Varkatzas dissing Atreyu’s song without him is weirder than you think

Now, Sanders has finally broken his silence on the viral meme. During a recent interview on Late Night With Seth Meyers, the Senator only had one thing to say about the photo.

“I was just sitting there, trying to keep warm, trying to pay attention to what was going on.”

He also shares that Jen Ellis, the Vermont school teacher who made his now-viral mittens, has been overwhelmed by the response.

“She is a schoolteacher and a very, very nice person, and is somewhat overwhelmed by the kind of attention that’s being shown to her.”

As for what was in that envelope Sanders was carrying around on Inauguration Day? He says it’s “top secret.”

Now, Sanders is taking that viral meme and really doing some good with it. This week, he launched a fleece crewneck that features the famous photo across the front. The “Chairman Sanders Crewneck” is available on his online merch store for $45 and it looks like certain sizes have already sold out. 100 percent of proceeds go toward Meals on Wheels Vermont, a charity that addresses senior hunger and isolation. 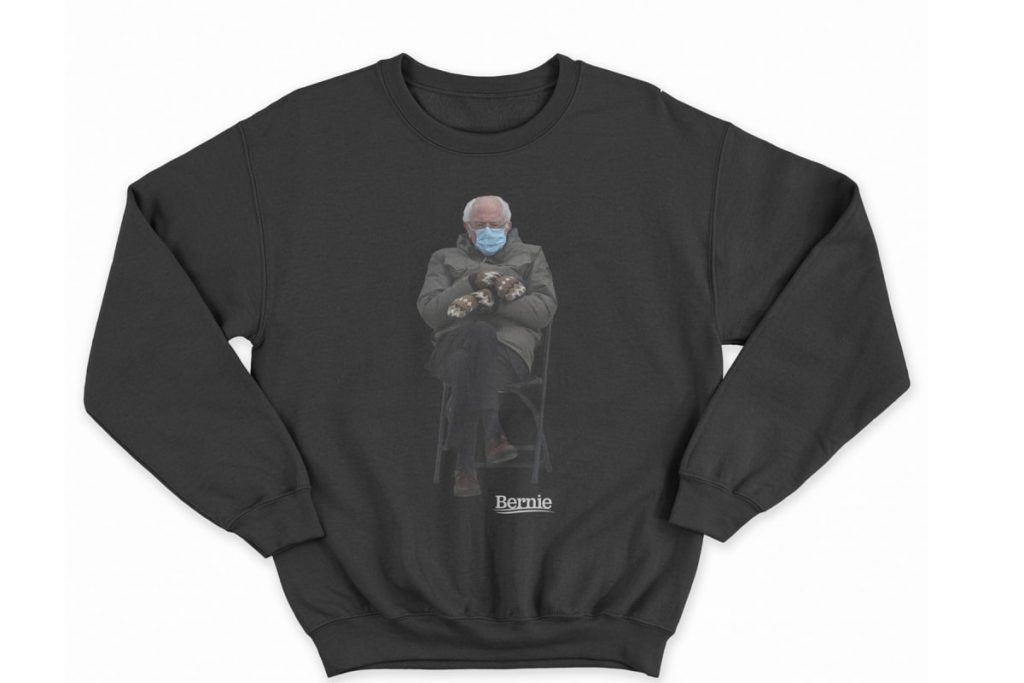 What was your favorite Bernie Sanders meme you saw this week? Are you going to buy his new sweatshirt that is benefitting charity? Let us know in the comments below.