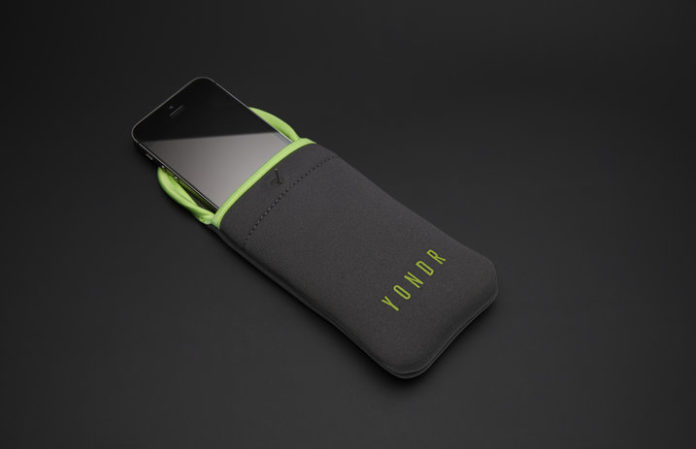 The use of cellphones at concerts has become a bit of a hot topic after artists such as Jack White and the Misfits have taken things to the next step by banning the use of cellphones at shows. Phone-locking service Yondr aims to put the focus back on the music by locking fans' phones in pouches, forcing them to present and in the moment.

Now, White has hired the company for his upcoming tour, making this the first full music tour to employ the tech company.

White has admitted that he hates seeing fans more involved in their phones than the music, going so far as to beg fans to put their phones away. This time he's taking things into his own hands by hiring Yondr for his spring tour which kicks off April 19.

So how does it work? It seems to break down into these three steps:

As you enter the phone-free zone, your phone is placed into a Yondr pouch/case.

Once you're inside, the case will lock. You're still allowed to keep your phone on you at all times; you just can't access it.

The company provides “phone zones” which allows you to make emergency calls. Simply tap it on the unlocking base and the case will unlock.

Artists who use the Yondr cases make a point to announce it prior to the show, so fans are not taken by surprise. Of course, not everyone is happy to give up access to their phones. Some artists and promoters believe cellphone use during shows only enhances the experience.

“Potentially, the communal experience for a Justin Timberlake or a Drake is enhanced by a cellphone,” a concert-business source tells Rolling Stone. “Potentially, a cellphone at a Ryan Adams show detracts from it.”

Long-time Nashville promoter Brock Jones adds, “The last thing [artists] want to do is shut down socials during the show—if anything, they get upset if the bandwidth is not big enough for people to be able to Snapchat or Instagram. They want people posting during the show.”

On the opposite side of the argument, some artists believe fans need a break from their phones in order to be present and in the moment. Some fear that recording the entire show can be distracting to those around them.

“It feels weird at first, but once you immerse yourself, it becomes a unique kind of concert,” says Jon Lieberberg, manager of Haim who have used Yondr. “It's almost like a social experiment.”

Yondr adds roughly $2 to every ticket price, providing its own staff at shows. The company's website encourages fans on the positives of a phone-free experience, claiming them to be “more fun.”

“Phone-free shows are more fun. Artists are uninhibited. The audience is present. Everyone is swept up into a shared mood. We work with artists, venues, promoters and labels to create phone-free shows, events and tours.”

Should phones be allowed at gigs? And is it even possible to maintain a strict no photos policy in 2018 when most everyone has access to a smartphone? Sound off in the comments below.