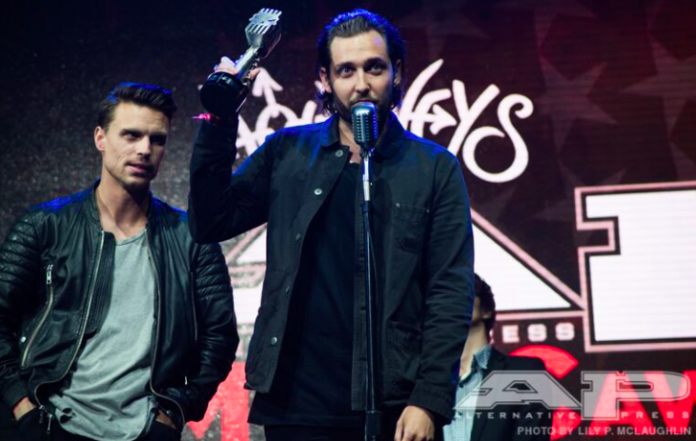 You Me At Six frontman Josh Franceschi spoke to BBC Politics today, continuing his protest against ticket scalpers.

“When a gig is announced, fans head to primary ticket websites, often to be told it's sold out. But most of the time they're not,” Franceschi says. “It's the touts who have bought them, forcing fans to pay hiked up prices on secondary websites.”

He continues, “Enough is enough—genuine fans are being priced out of the equation. Music lovers are consumers too, and consumers have rights. In New York, legislation is in place. The U.K. must follow suit.”

What do you think about this issue?

When tickets went on sale for You Me At Six's intimate show in London, they—unsurprisingly—sold out instantly. In response, frontman Josh Franceschi sold an extra 100 tickets to fans in person.

Franceschi is an outspoken figure in the movement against ticket touts (A.K.A. scalpers)—those who use bots to buy up large amounts of tickets and resell them to fans at inflated prices for profit. The singer made the gesture, according to his Twitter, to combat these “secondary ticketing issues” and to assure its “fans that are getting them.”

Read more: You Me At Six stop show to help injured fan

Other members of the music industry, including representatives from Ticketmaster and StubHub, joined Franceschi to address the Culture, Media and Sport Committee in a one-off session, focused on “ticket touts and the problem of using software to harvest tickets from primary sellers' online sites and selling them on at inflated prices to the detriment of fans,” as a Parliament news report says.

An amendment to the Digital Economy Bill that would have made it an offense to use a digital purchasing software to acquire an excessive number of tickets was previously tabled. The session was held to “make a recommendation from the Committee as the necessary reforms that we think are needed to stop abuse in the ticketing market” before the Bill goes back to the House. See some quotes from Franceschi during the session via Music Week below.

Read more: Pierce The Veil, Against The Current, Too Close To Touch, more talk about their first concerts

Franceschi: “It's about the next generation of musicians, we have a responsibility to them to change things” #secondaryticketing

Franceschi: “Money's been taken out of the industry and put into the hands of people who are only concerned with lining their own pockets”

Wildlife Ent's Ian McAndrew: “The relationship between primary and secondary ticket sellers is a concern, there's a lot of confusion”

Paul Peak, StubHub: “We're under no legal obligation to police our site” #secondaryticketing

Bingham (to StubHub, eBay and Ticketmaster): “You are not helping yourselves.” #secondaryticketing

Walker: “It goes beyond turning a blind eye, secondary sellers are covering [for touts] in some cases” #secondaryticketing

“Everyone should be able to have the same chance to buy tickets at the price they were intended to,” Franceschi told BBC Newsbeat back in October.

He continues, “We're playing a very intimate show at Dingwalls in London and we've already seen tickets on websites for triple the amount they were supposed to be. They're [ticket touts] making money out of real genuine fans of music. For me, genuine fans of music have given me the chance to go off and see the world.

“This is for people who want to be in live music situations and they should not be getting ripped off in the process.”

When NME asked Franceschi about the campaign, he said, “We’re trying to change the legislation to make it illegal for secondary ticket companies to buy, for some shows, thirty per cent of the capacity of the venue and reselling them at a hiked up price. There’s been a growth in that part of the industry of over one billion pounds last year. It is illegal to tout tickets outside a venue but there don’t seem to be many people trying to give it a voice.”

He cites Mumford & Sons, Alt-J and One Direction as being supportive of the online initiative.

“We managed to get the petition up to 80,000 signatures, so albeit we didn’t get the 100,000 which on paper you need for it to be discussed in parliament, we had some very positive talks last week and I met the Minister For Culture & Performing Arts and they’re behind it,” he explained. “I’ve made a big thing about this tour, I’ve sat down with our promoters and management and told them all the companies that are no longer allowed to sell tickets for You Me At Six.

“This is about fans of live music and enough’s enough, man, there’s got to be somebody out there representing those people. Hopefully there’s some changes made.”

That intimate London set at Dingwalls will see You Me At Six headlining the Dr Martens' Stand For Something tour on Nov. 26. About standing for something, Franceschi says, “I’d like to be remembered for being part of something that celebrated individuality while encouraging people to accept and understand people for the way they are and who they are. I stand for celebrating the inner and outer beauty of all individuals.”

You Me At Six picked up the Best International Band accolade at this summer's APMAs ahead of their Night People announcement, a Jacquire King produced full-length slated to release Jan. 13. Listen to the title track here.

What do you think about the ticket scalping issue? Let us know in the comments.