YUNGBLUD's "Cardigan" and "I'm With You" mashup was part of his BBC Radio 1's Live Lounge performance.

This week, YUNGBLUD performed an emotional cover mashup of Taylor Swift‘s “Cardigan” and Avril Lavigne‘s “I’m With You.”

Now, both Swift and Lavigne have reacted to YUNGBLUD’s rendition of their hit singles.

Accompanied with a string quartet, YUNGBLUD’s “Cardigan” and “I’m With You” mashup was part of BBC Radio 1‘s Live Lounge. The performance is a bit softer than his previous appearances on BBC Radio 1 and truly shows his vulnerable side.

He starts off the performance with “Cardigan,” but soon effortlessly weaves in Lavigne’s “I’m With You,” creating a 2020 meets 2002 mashup we didn’t know we needed until now.

Since the performance, both Swift and Lavigne have shared their thoughts on the cover. Lavigne acknowledged the mashup on Instagram, calling it “epic. love it” and sending YUNGBLUD an appropriate fire emoji. 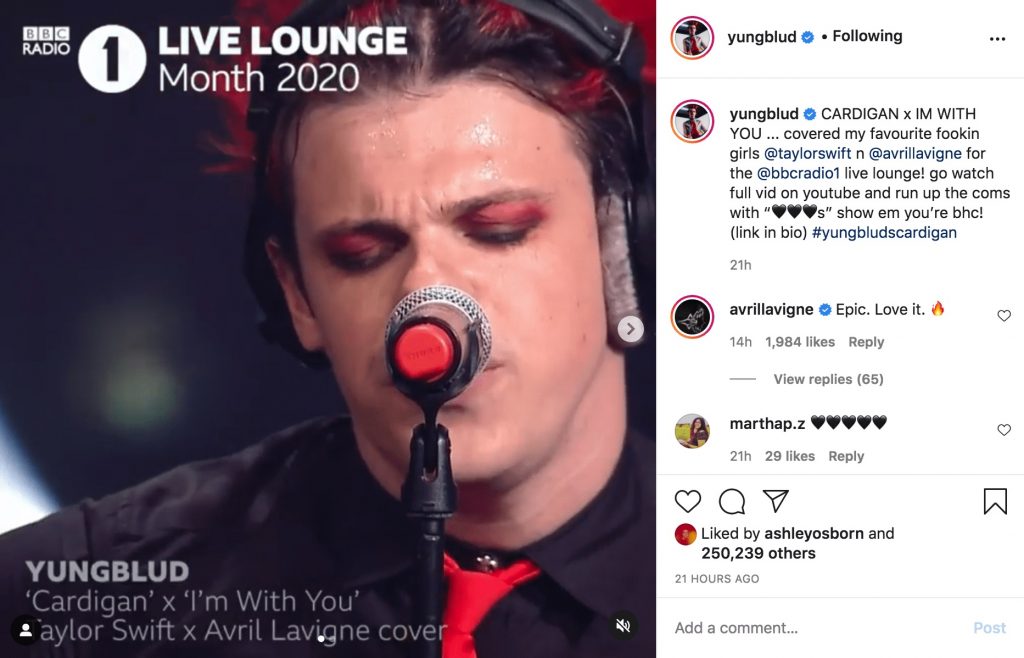 Swift had a few more things to say. On Tuesday, she sent YUNGBLUD a long tweet praising the clever mashup cover.

Read more: See how MGK celebrated ‘Tickets To My Downfall’ in the “drunk face” video

“WELL this took my breath away and I’m honored to hear Cardigan intertwined with the wonderful @AvrilLavigne’s masterpiece ‘I’m with you’. Bravo and thanks @yungblud!”

WELL this took my breath away and I’m honored to hear Cardigan intertwined with the wonderful @AvrilLavigne’s masterpiece ‘I’m with you’. Bravo and thanks @yungblud!! ???? https://t.co/uN69AADh4f

YUNGBLUD then responded to Swift, thanking the folklore artist for “creating such a beautiful song.”

thankyou for creating such a beautiful song. ??

The “Cardigan” and “I’m With You” mashup isn’t the first we’ve heard from YUNGBLUD. As part of a 2018 Alternative Press exclusive, he blended songs by Nirvana, Juice WRLD and Ariana Grande together at soundcheck.

As well, he did an incredible cover featuring songs by Travis Scott, Amy Winehouse, Shawn Mendes and Camila Cabello for his Live Lounge debut in September 2019.

YUNGBLUD’s time at the BBC isn’t over quite yet. This week, he announced that he has a new podcast coming to BBC Sounds. The YUNGBLUD Podcast will cover “everything young people go through, the fun stuff and the hard stuff.”

THE YB PODCAST IS COMIN! this is YOUR time to talk. im gonna speak to one of YOU every episode. i wanna year YOUR opinions on the world and what you may be going through. go to @BBCSounds website no matter who or where you are in the world to apply ???https://t.co/U9vHkC9jaJ pic.twitter.com/DRMuqZimVh

“Cardigan” is off of Swift’s eighth studio album folklore which she surprised dropped back in July. Since it’s release, Swift has broken various streaming and chart records.

Just this week, folklore returned to the No.1 spot on the Billboard 200. This feat means that Swift has surpassed Whitney Houston for the most weeks at No.1. Swift’s total weeks at No.1 now stands at 47 while Houston achieved 46 during her career.

Lavigne’s “I’m With You” is off of her 2002 album Let Go. Alongside “Complicated” and “Sk8er Boi,” “I’m With You” remains one of her most popular songs to date. In fact, it is currently one of her top songs on Spotify with over 113 million streams.

Read more: Halsey celebrates her birthday with the intimate “929” video

YUNGBLUD’s highly-anticipated sophomore album Weird! arrives Nov. 13. Along with his explosive single “Strawberry Lipstick,” the LP includes his vulnerable new song “god save me, but don’t drown me out.” YUNGBLUD recently released a video for the latter song which some think has a nod to My Chemical Romance in it.

As well, Machine Gun Kelly dropped the deluxe edition of Tickets To My Downfall on Tuesday. The new version includes “body bag,” his collaboration with YUNGBLUD and The Used.

Watch YUNGBLUD’s “Cardigan” and “I’m With You” mashup below.

What are your thoughts on YUNGBLUD’s Taylor Swift and Avril Lavigne mashup? Let us know in the comments below.