YUNGBLUD just received his first gold certified single thanks to his collaboration with Halsey and blink-182 drummer Travis Barker.

The trio dropped the track back in February, which is about self-sabotage.

“Working with Halsey and Travis was a fucking dream—at the end of the day we’re all rock kids,” YUNGBLUD says. “We grew up with a mutual adoration for the genre so it completely makes sense that we would come together and try to modernize it.”

You can see the video for “11 Minutes” below to celebrate its major accomplishment.

Machine Gun Kelly also recently wrote on Instagram that his collab with YUNGBLUD and Travis Barker “I Think I’m Okay” is almost gold as well. Therefore, YUNGBLUD could have a second gold single before long. You can see MGK’s post below. 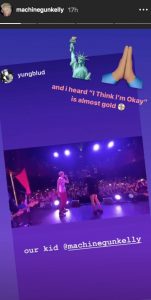 YUNGBLUD recently announced an intimate tour where he will strip-down all the songs from his upcoming the underrated youth EP at a few exclusive shows.

The UK shows will take place in October and November at three venues.

To get entry to The Intimate As Fuck Tour, all you need to do is pre-order his EP here, the artist revealed on Twitter.

“im gonna be playin all the songs off the ep and more stripped as fuck … talkin , cuddlin , drinking tea, having a couple beers n a jolly old time,” YUNGBLUD wrote on social media.

THE INTIMATE AS FUCK TOUR! ??? im gonna be playin all the songs off the ep and more stripped as fuck … talkin , cuddlin , drinking tea , having a couple beers n a jolly old time … all u gotta do is pre order the ep thru this linkhttps://t.co/Ghn3jVI6aJ

the underrated youth drops Oct. 18, one week later than originally planned. Preorders are available here with the tracklist below. Also, you can check out a video for “original me,” a song from the record featuring Imagine Dragons vocalist Dan Reynolds that YUNGBLUD just released below.

YUNGBLUD is finishing up the Twisted Tales of The Ritalin Club tour—a name inspired by his just-dropped graphic novel—with Missio as support. Check out a full list of remaining dates below with tickets here. Also, the new dates for the intimate shows are listed below as well.

What do you think of YUNGBLUD receiving his first certified gold single? Sound off in the comments down below!