YUNGBLUD was set to perform a private concert at Hanford High School in California but the show has since been canceled due to request.

The singer’s latest competition in partnership with Chegg offered one lucky student body the opportunity to see him perform at their school. As part of the educational technology company’s Chegg Music 101 initiative, students could vote to bring YUNGBUD to their high school or college.

Read more: How well do you remember the lyrics to “Still Waiting” by Sum 41

Aside from the gig, the winning school would also receive a $10,000 grant for their music department, formally called the David B. Goldberg Music Grant.

If that wasn’t enough, the musician would also be hosting an exclusive Q&A about his career, the industry and more during his visit.

It was revealed on Tuesday that Hanford High School had won, shortly followed by complaints about the artist’s song “Kill Somebody” with some saying that the lyrics were not appropriate for a high school audience. Hanford High School shared a since-deleted update to the school’s Facebook page on Thursday following backlash about the concert. You can see a screenshot courtesy of the Hanford Sentinel.

We have listened to our community about the Chegg Music 101 award and share concerns about how the performer YUNGBLUD chooses to use his music to deliver his message. We have requested that Chegg Music 101 change the associated artist. Our hope is that we can move forward with accepting the generous $10,000 donation for our students with a less controversial artist. 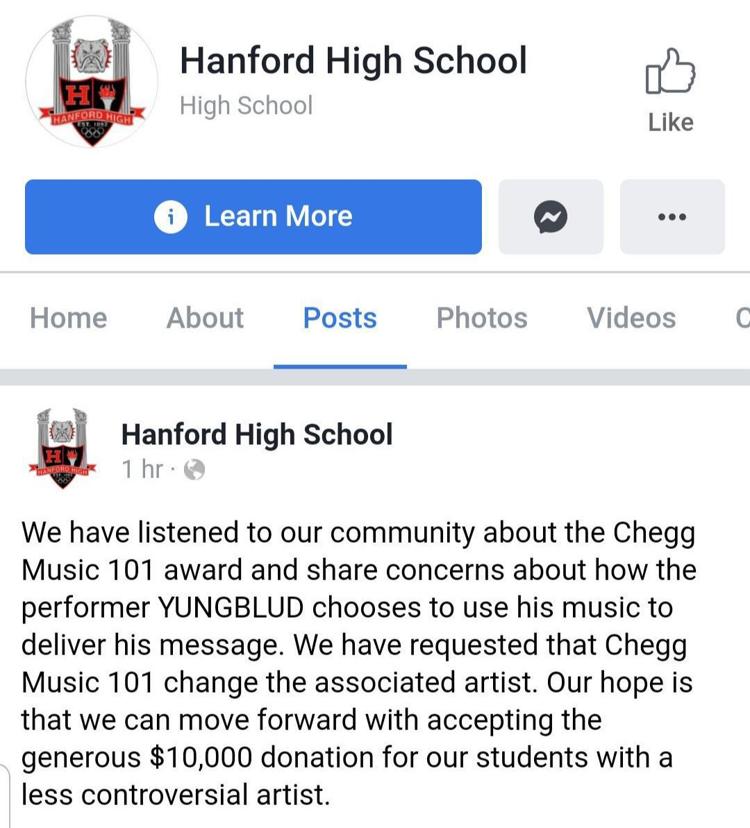 According to the Hanford Sentinel, the student that entered Hanford High into the contest, Anella Tamez, believes that the complaints are not valid.

“I just felt shock because it seems like the parents who were complaining didn’t seem to really look into the whole message behind his music and they seem to be only going off of his looks and his video,” Tamez said referencing the “Kill Somebody” music video. “It made me a little bit upset that the school didn’t at least ask the students or other parents on their opinions on what they should do before just immediately trying to shut it down.”

YUNGBLUD took to Instagram today to ask people not to judge others, and to assure his fans at Handford High School that he will still be there even if he has to play “outside the fookin gates.” You can read what the artist had to say below along with the video.

Yo! What’s going on? So some of you may or may not know that I partnered with Chegg to go and perform at a high school in America. What Chegg does is they give opportunities to school and colleges to vote and if they win they get a 10,000 dollar grant for that school and an artist comes and performs at their school and I was that artist this year. Hanford school in California won this year but some of the local community and the news petitioned against me coming because they believe that my community and my songs are insensitive, especially “Kill Somebody” towards gun violence and school shootings.

I want to do a video message just to say, just to ask people to look beyond the surface of things because if anybody actually knows my community and knows me, what we pride ourselves on is bringing people together and unifying people and allowing people to be themselves. We are activists against hate, against guns, against gun violence, against school shootings. We are shouting every single day to get closer to making that become totally obsolete. I just ask you, if you don’t know something, please do not judge it on surface level. Please be informed and please learn about things. I can’t wait to come and play Hanford. I will be there, I love you. I’ll see you soon. I love you so much. Rock n’ roll.

‪people are going to judge you, before they even know who you are and what you represent. but don’t let that stop you being who you are. let it be their ignorance. hanford high school i will be there. even if i gotta play outside the fookin gates 🖤 ‬

More on YUNGBLUD and “Kill Somebody”

The song in question, “Kill Somebody,” is off YUNGBLUD’s debut studio record 21st Century Liability. The video is a visual representation of what anxiety and depression feel like inside his head, according to the songwriter.

“This song is about the darkest place I discovered in my mind. At first it really scared me. But i learned to talk about it,” he explained on Instagram. “For those of you who have felt or feel any type of darkness, know your not alone. Mental health is finally being taken seriously allowing conversations to be had and this song helped me free myself from the weight of it for a while.”

this is a visual representation what anxiety and depression feels like inside my head. this song is about the darkest place I discovered in my mind. at first it really scared me. but i learned to talk about it. for those of you who have felt or feel any type of darkness, know you’re not alone. mental health is finally being taken seriously allowing conversations to be had and this song helped me free myself from the weight of it for a while. i was so excited to keep it really stripped back because i didn’t want to cloud the message behind it. i hope you enjoy it! 🖤 shout out to mr @heyhunt who was integral in bringing this to life ! 🖤 thankyou to @clashmagazine for premiering (link in story)