He revealed all the details for his upcoming EP.

YUNGBLUD just unveiled the highly-anticipated video for his track “Hope For The Underrated Youth” and dropped details about his upcoming EP.

He’s been teasing fans that the video was dropping on Tuesday via social media.

On Twitter, he also teased that he’d be sharing his “biggest announcement yet” in the comments of the video, which were the details regarding the EP. You can see all of his tweets below.

hope for the underrated youth video out TOMORROW 9am (pst) … u ready? ? pic.twitter.com/vrXqjxazz6

Then he dropped the cinematic video that shows him and his group of outsiders, or the Underrated Youth, resisting an oppressive military force.

The video shows the youth who struggle for peace against a power system that uses violence to keep people down. It gets pretty graphic, and has a heartbreaking twist at the end that really drives in the overall message.

“I wanted this project to amplify a world that is consumed with unjustified hate. A world, where the common denominator of my generation is the fight for hope, unity and the deep desire for equality,” YUNGBLUD said of the video. “Our ideologies are colliding head on with the hate around us, but we are beating it with a bouquet of fucking flowers! I wrote this project about the people I’ve met around the world, the stories I’ve heard and the journeys, that went on inside my own head.  The video was shot in Bulgaria with the most incredible young people. They helped me tell this story. They made this video what it is. Thank you.”

You can see the video below.

Along with the new music video, he revealed that he’s dropping the underrated youth EP on October 11. The record contains six songs, with one track featuring Dan Reynolds of Imagine Dragons. Check out the cover art and tracklist below. 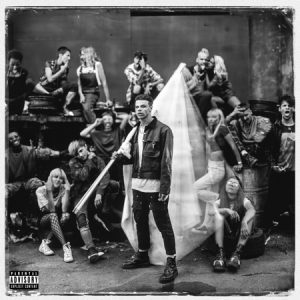 What do you think of the new YUNGBLUD video for “Hope For The Underrated Youth”? Sound off in the comments down below!