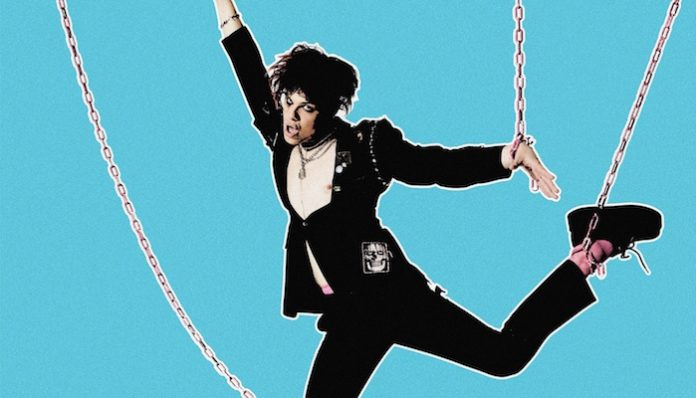 YUNGBLUD launched somewhat of a viral marketing campaign earlier this week as a mysterious phone number began floating around.

Following a second “story” recorded on the hotline that surfaced yesterday, the singer is finally confirming the theory of a new track dropping tomorrow.

The past two days, when the number is dialed, the singer tells a story over some eerie music before whispering “May 24.” Today, he ends it with instructions to listen. Check out the full clip below.

“I want to tell you a story of a little boy named Charlie whose parents never wanted him. He was born on the 16th of April 1972. He has long brown hair and electric blue eyes. His favorite hobby was to ride a bike. His mother and father craved a little girl whose hair they could brush, whose shoes they could clean. He was reminded of his insignificance every single day, and obviously, Charlie became very depressed. He wanted to leave—get on his bike and cycle to the city. However, his parents heard him conspiring with his friends. While Charlie was washing, they dropped a toaster into his bath and laughed while they saw 1000 volts go through the son they wished they never had. They may appear superior, they may appear bright, but they make you feel inferior, but guess what parents ain’t always right. Don’t call back tomorrow, just listen tonight.”

May 23, 2019
"Don't call back tomorrow, just listen tonight"
Including me screaming "WHAT?!" in confusion cause i forgot i was recording @yungblud pic.twitter.com/ri0xF83biL

Shortly after the third recording, YUNGBLUD confirmed the track by quoting part of the story and what is assumed to be the new track’s lyrics:

Shortly after the initial post, YUNGBLUD shared the release worldwide, which are 9 p.m. PST/12 a.m. EST tonight and 12 a.m. local time in all other territories. He then shared a 5-second clip of what appears to be the track.

Part 1 and 2 of the YUNGBLUD teasers

The first “story” that hit the hotline Tuesday is the same as a tweet YUNGBLUD posted in December and then re-shared when the hotline went live.

Once dialed, haunting music plays for several seconds with laughter before YUNGBLUD begins a monologue—the same story from the aforementioned December tweet:

“I want to tell you a story. One day, my daddy put a gun to my head because he saw me kissing a boy. ‘If I ever catch you again, I’m gonna spread your little brains out over the pretty wall.’ So you know what I did? I woke up one night, tied him with tape and dragged him out of the house and locked him in the garden shed. Then, I cut a hole in the door and forced him to watch while I had sex with my best friend. Call back tomorrow for another story. May 24.”

The singer teased part two on his Instagram story Wednesday morning, urging fans to give the number another dial. Over the same eerie, circus-style tune, YUNGBLUD tells another tale, this time in third-person.

“I want to tell you a story about a teacher who fell in love with a man of the cloth. He brought her bright red roses every Sunday afternoon. She loved him so much with all her heart and he loved her back. However, one day she saw his pupils dilate for another. She became so possessed with jealousy she would say to herself every night for six months before she would sleep if he can’t have me, he can’t have anybody. Naturally the love between them went sour. He threatened to walk out, but just as his fingers grazed the doorknob she took the roses out of the vase, poured the water on the floor and bashed his head straight in.”

You can listen to the call, uploaded by a fan, below.

YUNGBLUD had been playing the track on his U.S. run, which includes the line he delivers in the first monologue. You can check out a snippet below, one of which is from The Parish in Austin May 8.

Now we finally know that theory is correct with “Parents” arriving tonight. The track marks his third release this year following “Loner” in January and Halsey/Travis Barker collab “11 Minutes” in February.

In addition to the upcoming song, YUNGBLUD also just launched his graphic novel, The Twisted Tales Of The Ritalin Club, last Friday. It’s set to release October 15, and the deluxe edition is available for preorder now on Z2 Comics’ website. The standard edition is available via Amazon in the U.S. and the U.K.

YUNGBLUD also recently released his Live In Atlanta album, which you also have the chance to catch in person thanks to his vigorous touring schedule. He has several festival stops including a 25th anniversary Warped Tour show and a set at Machine Gun Kelly’s EST Fest, which was just announced yesterday. Dates are listed below, and tickets are available here.

What do you think YUNGBLUD is teasing? Sound off in the comments below!