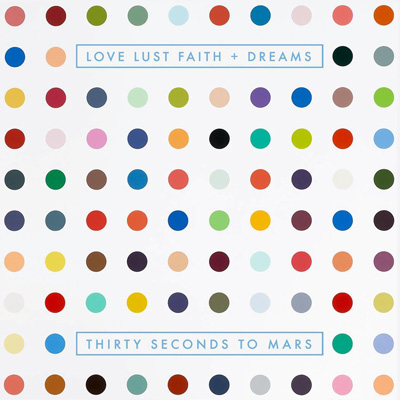 With 2009’s This Is War, 30 Seconds To Mars released their finest work, a towering, anthemic album on a vast scale, and it was well suited to the larger venues they made the jump to. It would have been hard for anyone to make a record bigger than that, and with Love Lust Faith + Dreams they appear to have instead pulled back and made something that is a little more compact and intimate. This does not mean they have gone lo-fi, and they maintain their signature sound throughout. But, with shorter songs and more restrained production it lacks the epic quality of its predecessor, and overall it is weaker for it.

A handful of great songs do stand out. “City Of Angels” is compelling from start to finish, building from ethereal beginnings to an enormous, drum-heavy climax, and “The Race” has a jittery edginess to it that is a perfect counterpoint to its throbbing chorus. The best are “Bright Lights” and “Do Or Die,” which see 30STM exercise their capacity for writing titanic choruses full of sweeping drama in a manner that is almost untouchable. However, a few tracks do fall flat, the Muse-esque “Conquistador” and single “Up In The Air” sounding just too easy for Jared Leto & Co., and the largely instrumental “Pyres Of Varanasi” and brief “Convergence” come across as filler.

As with all of their output to date, one major sticking point 30 Seconds To Mars will always face in the eyes of their detractors is that it can be hard to emotionally invest in their songs. They are almost too polished, too perfect a construct of what an arena-rock band should be, and frontman Jared Leto might be the real deal or he might be playing “rock star.” When their songs are as engaging as on This Is War, this is very much pushed to the background, but for all its good qualities, Love Lust Faith + Dreams just doesn’t quite have the strength to all the way distract from these potential shortcomings. Maybe next time they’ll return to the bigger is better ethos that has served them so well in past, and drown out everyone who says otherwise.