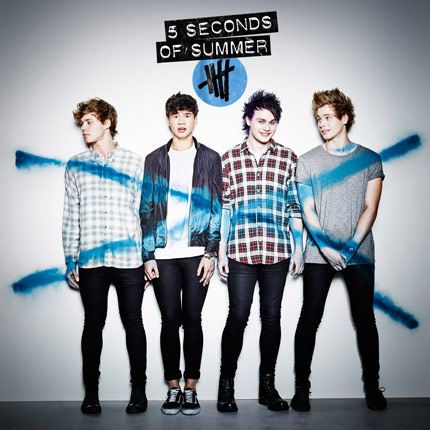 Depending on your opinion of them and their music, you might dub 5 Seconds Of Summer a boy band, pop-punk or something in the middle—but no matter where you fall in the are-they-or-aren’t-they debate, one thing you can’t accuse the teenage Australian quartet of is being disinterested in their future. A quick glance at their self-titled debut full-length (out now in the U.K. and Australia, and out July 22 in America) reveals the band members had a hand in writing 11 of the 12 tracks. The lonely outside contribution is the album-closing “Amnesia,” penned by, among others, Good Charlotte’s Benji and Joel Madden.

But instead of hooking up with the regular cavalcade of pop hit-makers like their buddies One Direction, 5SOS have opted to team with some of the scene’s biggest names (like Dr. Luke really needs a fifth Jet Ski, anyway). In addition to the Madden Brothers, the band wrote with the likes of Yellowcard’s Ryan Key, Boys Like Girls’ Martin Johnson, All Time Low’s Alex Gaskarth, Goldfinger’s John Feldmann and more; from this group, only songs co-written with Gaskarth and Feldmann (outside of the aforementioned “Amnesia”) were chosen for the disc, but these tracks are far and away the standouts on 5 Seconds Of Summer. The quasi-ballad “Long Way Home” smacks of late-’90s alternative rock like Everclear and Third Eye Blind, while the area-pop earworm “End Up Here” is All Time Low’s Nothing Personal on PEDs and finds 5 Seconds Of Summer dropping references to both Kurt Cobain and Bon Jovi. Had these songs appeared on the next All Time Low album, it might have led to the long-awaited radio airplay the band have always craved. As it stands, Gaskarth might have his best shot at that kind of success here.

5 Seconds Of Summer has been a long time in the making (as evidenced by the omnipresent #Finallya5SOSAlbum trending Twitter hashtag), and it’s even clearer when you stack up songs like “End Up Here” and the pogo-friendly second single “Don’t Stop” next to “18” (Charlie Sheen name-check and all) and “Good Girls,” both of which have been kicking around in the 5SOS catalog for years. The progression is remarkable, so much so that you wonder if the early material was kept around to assuage fans’ fears as the band made the jump from Down Under unknowns to global social media sensations. It certainly feels a bit jarring, especially “18,” which trots out questionable couplets like, “She’s got a naughty tattoo in a place that I want to get to/But my mom still drives me to school.”

No one will argue 5 Seconds Of Summer is high art, but it ultimately works more often than it doesn’t. And, perhaps most important of all, it feels authentic. Sure, first single “She Looks So Perfect” is a ball of us-against-the-world puppy-love angst and could double as an American Apparel underwear commercial, but the fact that these songs are awash in live drums and real instruments proves 5 Seconds Of Summer want to rock as much as they want to reach Top 40 crowds. (Point a great deal of praise to John Feldmann, the perfect producer for a band like this.)

If you’re able to look past the One Direction connection and take the songs for what they are, you might just find these kids are miles ahead of most bands their age and that their stock will only continue to soar. And if you can’t? Well, at least they’ve given their idols a chance to showcase their songwriting skills to a bigger audience (and make some serious cash in the process)—something we can all agree is awesome, right?