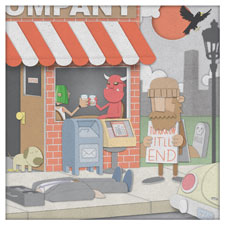 99 Songs Of Revolution: Volume I

There is a dichotomy that exists among Streetlight Manifesto. While the ska-punk septet include four horns that are often blaring in opposite directions, their arrangements are meticulously crafted and intentional. Although their records appear to scream, "We don't give a shit what people think!" (the band are championing what has become an unfairly hated genre) each release of theirs seems bogged down in frustrating delays from corporate outsiders. When those records finally come out, they alternate between concept-fueled full-lengths and, well, very bizarre, seemingly off-the-cuff cover records. And although the weirdness of covering your old band's entire first record (as SM did withKeasbey Nights, originally by Catch 22) seems impossible to top, 99 Songs Of Revolution is definitely their most strangely complicated work.

Sure, a bit of the oddness is just the nature of the project as this isn't your standard cover album. When all is said and done, 99SOR will be eight full-length records – two from Streetlight, two from acoustic side project Bandits Of The Acoustic Revolution and "two each from two other SM related groups." To repeat, that's eight full cover albums, four to be released by bands which share the common denominator of singer/songwriter Tomas Kalonky and four others by two bands that may or may not even exist yet.

Believe it or not, though, it's the tracklisting on this first installment that makes99SOR so confusing. Although it can't be expected that SM would be the first band to tackle any of these songs, a handful of the tracks have already been similarly altered and popularized by their punk rock peers. For example, "Me And Julio Down By The Schoolyard" (one of two Paul Simon-penned songs on this outing) was taken on 15 years ago by Me First And The Gimme Gimmes. To top it off, SM cover a song by the aforementioned Bandits Of The Acoustic Revolution who, if you lost track, will also be part of this 99 Songs Of Revolutionproject. What?!

Unfortunately, it really does take getting past these baffling decisions to get into this record. Once you do, you get a very clear picture of everything that has made Streetlight Manifesto so much more successful and current than their peers in the world of ska-punk–the seemingly simple but perfectly executed combination of heartfelt sing-alongs and first-class musicianship, particularly exemplified by the horn players who are in top form. Their version of "Hell" by Squirrel Nut Zippers, which has been a live staple for years, showcases all of these elements. People pack the house to see these guys perform because they really are a pleasure to watch and listen to, and that shines through on this album.

However, this record is at its best when the band stray from the formulas that had been set forth by the original artists. For every seemingly standard cover (does the world really need another cover of "Punk Rock Girl" by the Dead Milkmen?) there are reinterpretations such as their reggae take on Bad Religion's "Skyscraper" and the acoustic guitar-laden cover of NOFX's "Linoleum", both of which give the melodies of the originals a little more room to breathe, allowing the listener to recognize just how brilliant those songs are. The less-predictable-than-it-sounds approach of letting the horns replace the synthesizers in their cover of the Postal Service's "Such Great Heights" is also a high point of the album, proving that ska-punk bands have the ability to be much more than just wacky party music for marching-band nerds to listen to. That's why it's a shame that there are so many roadblocks in the way of enjoying Streetlight Manifesto's music, whether it's in the form of label interference or peculiar song selections. Because once you get to the good stuff, they really are one of the best bands out there today–ska, punk or otherwise.