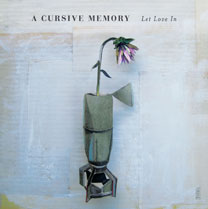 A Cursive Memory wear their influences proudly pinned to their pop-rock chests. On their second full-length, the band bounce between new-era emo (“The Year”), Boys Like Girls-esque pop (“Fall Away”) and solemn, piano-heavy balladry (“Dream Away”), and musically, they’re proficient enough to do each sound well. But there’s little here to differentiate A Cursive Memory from the heavy-hitters of each style, and that failure to separate from the pack ultimately hurts Let Love In. (An additional note to every band out there: the ukulele fascination needs to stop now.) The best chance the group have to transcend this scene is by harnessing the adult-alternative leanings of tracks like “Garden” and “Wondering” and milking them for all they’re worth. That’s not to say the AAA-radio scene is any less crowded or cutthroat than the current emo community, but fans of bands like the Fray and Augustana might be more willing to latch onto ACM’s sun-kissed melodies and twinkling ballads than a swoop-haired kid in a neon T-shirt. There are flashes of greatness on Let Love In, but the fact that they’re not more common is ultimately frustrating.