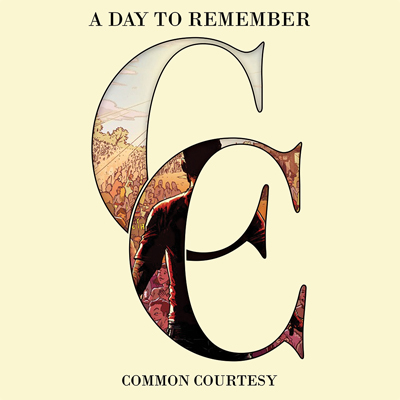 A Day To Remember are no dummies.

It’s been a long, litigious three years for the band since releasing 2010’s What Separates Me From You, and after finally re-emerging victoriously from their high-profile lawsuit with Victory Records just this month, now is certainly not the time to drop a dance-pop record or space-rock opera on arenas full of pent-up ADTR fans jonesing to get their slam on. Showing what some might call wisdom, A Day To Remember obviously know on which side their bread is buttered.

Thus Common Courtesy, their fifth full-length, is a classic ADTR record in every sense—from the riffs to the lyrical content—tracked and tweaked on a level befitting the band’s current hugeness. But it’s the kind of release that will divide listeners squarely down the middle: You can easily both condemn the record for being formulaic, or praise it for staying true to the band’s clearly defined sound. It’s really all a matter of how you look at it.

Fans will pull from Common Courtesy whatever they liked about ADTR in the first place, whether it’s full-on brutality or popcore sensibility, because all the hallmarks are present in good quantity. However on Courtesy, it’s the pop-punk material that wins, providing the most memorable moments on the record, like opening cut “City Of Ocala,” with its warm tribute to the band’s hometown, the likeable hard-working moxie of “Right Back At It Again,” or the nostalgic road anthem “I Remember” that closes the album, with singer Jeremy McKinnon lyrically recalling the days of sleeping in vans and playing empty rooms. (Those days are definitely gone.)

The other huge part of the ADTR equation, of course, is the heavy stuff, and Common Courtesy delivers on this front too, albeit without breaking much new sonic ground. You’ll consistently hear touches of the unmistakable chug-a-chug algorithm ADTR perfected on 2007's For Those Who Have Heart and then faithfully reapplied thereafter on 2009's Homesick and What Separates Me From You. “Sometimes You’re The Hammer, Sometimes You’re The Nail” and “The Document Speaks For Itself” could’ve just as easily been on Have Heart; the latter also shamelessly revisits “Mr. Highway” from Homesick, with McKinnon swapping “Disrespect your surroundings” with “No fucking respect,” as he identically roars into a stop-start breakdown. “Life Lessons Learned The Hard Way” and “Violence (Enough Is Enough)” provide still more pit-fodder, and let McKinnon vent more of his personal frustration from recent years, yet always within the predetermined framework. If you’re looking to just bang your head—and not have it blown—then the record does fine.

The balance of Common Courtesy—and arguably the least compelling tracks of this new batch—showcase the band’s current arena-rock status, with driving modern-rock numbers like “Best Of Me,” the ’90s alt-rockish acoustic cut “I’m Already Gone,” power ballad “I Surrender” and the mid-tempo radio rocker “End Of Me.” Here the band have never sounded more mature or refined in their individual performances, but unfortunately the songs themselves aren’t quite as convincing, and tend to drag. A few more pop-punk scorchers like the aforementioned or the dark-tinged cruncher “Life @ 11” would’ve been far more welcome in their place.

Is Common Courtesy ADTR’s best album? This reviewer would have to say no, but it’s a solid, honest effort nonetheless, and that’s worth something, too. After all the waiting and drama, there’s no question Common Courtesy will at least partially satisfy eager fans, because if nothing else, it’s a textbook A Day To Remember record. Whether or not that’s good or bad is entirely up to you.