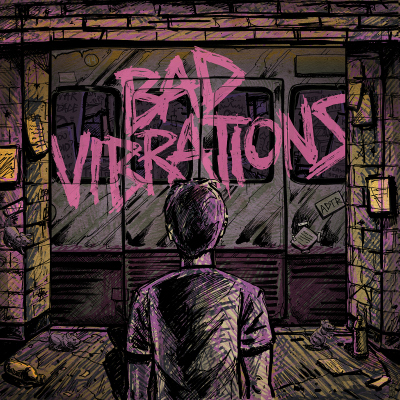 A Day To Remember would probably prefer to go a few years without some sort of roadblock threatening their art (or, in the case of their ongoing litigation against Victory Records, their career), but they’ve shown time and again to be one of the most resilient acts in the heavy music universe. In the case of Bad Vibrations, their sixth studio album, there’s a different kind of tension present: The album marks the first time the Florida quintet have written and recorded in a totally collaborative environment since 2007’s For Those Who Have Heart—and, as the band attested in their cover story in AP 338, the writing and recording process was an intense one, full of self-doubt, insane amounts of pressure and the occasional sonic squabble.

But the spirit of having all five members in a room clashing creatively—along with the steady hands of punk-rock super-producers Bill Stevenson and Jason Livermore (Descendents, Rise Against) and mixing legend Andy Wallace (Nirvana, Rage Against The Machine)—has resulted in some of A Day To Remember’s most forward-thinking, engaging and all-around exemplary songs to date. “Bullfight” mixes Spanish rhythms and syncopated guitars with a driving chorus, while the first single “Paranoia” is a mental breakdown set to speedy hardcore punk. Elsewhere, “Reassemble” and “Justify” seamlessly mix the band’s heavy and light sounds with a new, ambient flair, and the punishing “Exposed” is an uppercut of political venom from vocalist Jeremy McKinnon (“I’m pro-American but anti-politician”) that also finds the singer quoting the Disney film Newsies before his bandmates carve out their most intense breakdown to date, the musical equivalent of being thrown through a plate-glass window.

As adept as the band are at alternating between metalcore and pop-punk, McKinnon’s words are similarly nuanced and multifaceted here. That duality encompasses weightier themes such as addiction and cultural strife along with more lighthearted subject matter, like the nostalgic charm of the Descendents-meets-Millencolin “Naivety” or the dream-it-do-it optimism on “We Got This,” which harkens back to the band’s Homesick. A Day To Remember have never been afraid to dance with the darker side of life, but they’ve always countered it with a fair amount of level-headedness and—even though their music might not always show it—levity. (Accents like the gloriously over-the-top sound effects that have become an ADTR trademark prove these guys ultimately have a sense of humor about their art.) In the end, the band’s ability to juggle all of these ideas in a brand new, uncomfortable creative environment—and still find new ways to move their sound forward musically—has resulted in arguably their best album since Homesick.