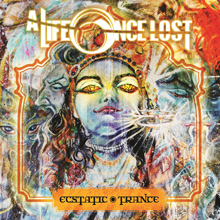 A Life Once Lost

A Life Once Lost are certainly not the first band to understand and appreciate the hypnotic element that lies underneath the fury and power of heavy music. Because all too often, we focus on the volume and brute force of metalcore and black metal without acknowledging how affecting it is to have the same riffs cycled over again and again. It wraps you up tighter within the song, giving it a much more powerful impact. But by titling their sixth album Ecstatic Trance, the Pennsylvania-based quartet put the emphasis on the rapturous elements of this new collection. It's the least showy metal record you're likely to come across this year.

Drummer Jordan Crouse and bassist Mike Sabolick spend these 10 songs locked into steady unflinching grooves, relatively free of fills and frills. And Douglas Sabolick—handling all guitar parts on the album for the first time – follows suit, circling around trudging and furious rhythm lines. Even when he tails off to do a solo, Sabolick manages to sound downright understated; just check out how he slinks his lead part into “Gnawing Lisp” eventually leading into another cycling pattern.

The weight of the album then resides on singer Robert Meadows' shoulders. Thankfully he is more than up to the task. His intense performance throughout is what stings and bleeds you as you're spinning around under the influence of the rest of the band's attack. “Madness Is God” is a prime example of this, as Meadows tears into lines like, “You will now suffer” and “I will show you that nothing matters more than death itself” with gleaming fangs. It's hard to know sometimes whether he's crying out to the heavens or just screaming into a mirror. Either way, the effect—as with the rest of this amazing album—is powerful and soul shattering.