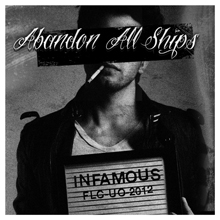 Do you like Emmure’s brand of chest-thumping, knuckle-dragging, psychotically bragging deathcore? Do you also like I See Stars’ teen-girl-bait style of trance-screamo? Then you are gonna love Abandon All Ships, who bounce merrily from roaring just-this-side-of-misogynistic threats over downtuned chugga-chugga riffs to crooning rapturous love lyrics over delicate keyboards and whooshing anime-soundtrack synth patches. On album No. 2, following 2010’s inexplicably titled Geeving, these five Canadians approach 21st century electro-screamo and deathcore with the same giddy, goofy fervor their countrymen in Chromeo exhibit while wallowing in ’80s R&B cliché. And frankly, the stylistic schizophrenia is the point, and half the fun. These aren’t songs, they’re collections of moments—some joyful, some so transparently phony in their rage that you’ve almost got to laugh (come on, dudes; Canadians never get this angry about anything, not even hockey scores), but almost all enjoyable.