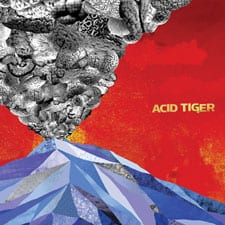 Given their inclusion of Converge and United Nations members, Acid Tiger will surely garner attention. Yet they share scant semblance to the aggro-blitz of either. Acid Tiger's songs ooze a sultry swagger that is more at home in '70s porn flicks (or '80s arena-rock concerts). The band hit their stride when they inject punk-fueled energy, as in the serpentine "The Claw." The venerable tag team of guitarist Lukas Previn (United Nations) and drummer Ben Koller (Converge) is Acid Tiger's secret weapon. Koller breathes life into a musty genre, best witnessed in the dizzying twists and turns of the seething "Like Thunder" (complete with gratuitous drum solo). Previn fulfills the classic rock requirement of axe-mastery, peeling off dexterity-defying licks throughout.

Yet what dogs most hard-rock bands throughout time afflicts Acid Tiger, too: questionable singing and musical self-induglence. The vocals are competent enough but become a testicle-squeezed squeal that at best approximates the sandpaper rasp of AC/DC's Brian Johnson. This preoccupation with some of the dubious aspects of straight up hard rock negatively affects some of the song structures as well. The nine-minute "Death Wave" comes off like a Mindfunk throwaway (a forgettable hair-metal stab at the big time by members of '80s hardcore pillars Uniform Choice). With seasoned musicians, even the most cliché-ridden genres can snap and sizzle. Problem is, the band's weaker moments make this Tiger sound more like a neutered house cat. '70s rock-cum-metal must bare its teeth and flash its claws. It also requires the right level of libido–though an overload leads to the STD-riddled extravagances and emotional vacuity of 80s hair metal.

The more we listen to Acid Tiger, the more it appears these songs were conceived with tongue firmly in cheek (and bong tightly in hand). Acid Tigermight have been a blast to record, but at times, it's a bust to listen to. It's a shame, since Acid Tiger demonstrate the potential to update and elevate a rock genre mostly ruined by scads of hairspray-loving bands throughout the '80s.