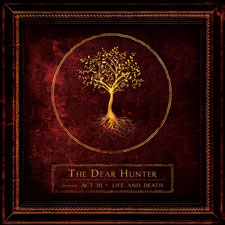 Casey Crescenzo, the multi-talented fountainhead of the Dear Hunter, has assembled a masterwork in Act III: Life And Death, ostensibly the midsection of his ongoing, six-act tale of a born-loser boy who falls for a whore. Life And Death expands the Danny Elfman-does-gypsy-vaudeville sound pioneered on TDH's two previous albums, dedicating more space to better explore the densely layered vocal swathes ("Writing On A Wall") and polyrhythmic grooves ("In Cauda Venenum") for which Crescenzo's become known. He flexes some serious harmonic muscle on the lachrymose "Saved" and the aching, album-closing trifecta "Son," "Father" and "Life And Death." If you'd prefer to simply commence wetting your shorts, jump to the 4:15 mark of "Thief" and listen through to the end of "Mustard Gas." Fucking bravo, man.

He Said He Had a Story