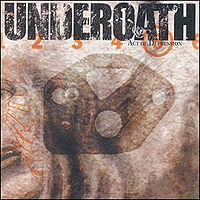 It’s hard to recognize this early version of Underoath. Few could have predicted the impact this Floridian band would have on secular and Christian metalcore alike, especially with this debut. Act Of Depression introduces a young group focused on Christ and complex metal. Far from the melodic leanings of their later incarnation, this record seethes with the shrill shrieks of Dallas Taylor and an unruly amalgam of death metal and hardcore. Guitarists Corey Steger and Octavio Fernandez issue Slayer-styled performances that eschew flashy leads in favor of churning riffs. While much of the album sounds hopelessly dated, Act Of Depression is on par with much of the metalcore that swept the hardcore landscape in the late ’90s.

“Heart Of Stone” illustrates the band’s considerable technical skills. It’s an unwieldy song traipsing through countless changes. Every song is similarly inexorable and complicated seemingly for the sake of being complicated. Two songs plod past the 10-minute mark. Few metalcore bands of this era dared crafting material of such length that at its best operates on a cerebral level. While Underoath may have found kinship in the brutal sound and religious ethics of Zao, Strongarm and Living Sacrifice, they were following a different musical path.

Despite flashes of brilliance, Act Of Depression doesn’t have the creative legs to stand the test of time (probably why it remains out of print). The band had yet to learn the art of editing or subtlety. Still, Underoath took the best parts of late-’90s metalcore and piled them together for a bombastic debut. Despite its many flaws, Act Of Depression is a curious look at the humble beginnings of an influential band.