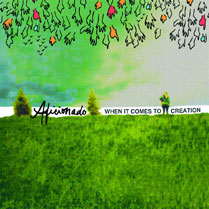 When It Comes To Creation EP

It's written pretty clearly in the record books that punk rock started as a simplified movement in response to the bravado and over-the-top shenanigans rock had begun to dabble in at the time. Aficionado must be some fantastic mediators in that sense, because they've forced both styles into the room and made them settle their differences over the course of the band's promising sophomore EP, When It Comes To Creation.

Aficionado take those classic-rock influences—dig those incredibly Who-esque keys—and wed them with a punk-rock aggression and abandonment that sounds more celebratory than anything. Think Kay Kay And His Weathered Underground with a few faster moments and an indelibly energetic spirit. In fact, lead vocalist Nick Warchol sounds a bit like mid-period Cedric Bixlar Zavala—you know, the guy who moved swiftly from post-hardcore heroes At The Drive-In to progressive rock behemoths the Mars Volta. It's a pretty similar juxtaposition.

The result is five impressively creative tracks with moderately catchy hooks and layers of quirky yet controlled frenzy. And we're talking layers: three guitars; horns; flute; female vocals; and the aforementioned keys. Through it all, the band manage to unravel spastic verses (the title track), culminate things in a brassy bridge a la Cursive's Happy Hollow ("Do Nothing, Be Nothing"), and plod with deliberate, intense melodies and total guitar shredding set subtly in the background ("Naysayers"). When it comes to Aficionado's creation, it seems they're bringing punk through a minor evolution of sorts.