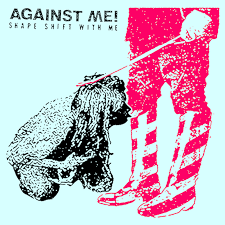 Shape Shift With Me

Transgender Dysphoria Blues, Against Me!’s 2014 career-defining masterwork and the best punk LP of the decade, was an album about inflection points, a conceptual piece by the newly female-presenting Laura Jane Grace on the terrifying rush of the moments on which everything hinges. Two years later (and two more since Grace’s 2012 public rebirth), Shape Shift With Me turns its attention to the living that follows, the sometimes-perilous but often mundane navigation of a re-cast life.

Shape Shift With Me is being presented as Grace’s most personal work, the one that finally turns away from geopolitics and toward the politics of the heart. That’s a nifty bit of misdirection. Even setting aside the fact that no one knows better than the birth-certificate-immolating Grace that the political is always personal, Grace has never shied from cracking open her chest on wax—see the fractured love of 2002’s “Baby I’m An Anarchist” and the gorgeously debilitating trust fall of 2007’s “Borne On The FM Waves Of The Heart” for two obvious examples. Hell, it was nearly a decade ago, on the lead track of the solo EP Heart Burns, that Grace planted her flag in the bombed-out borderland between love and country—“we’re in this together … random hearts in a cruel cruel world.”

As such, it’s inevitable that the stakes feel a little lower this time out. Shape Shift With Me pushes boundaries, but they’re more often musical boundaries than lyrical ones. The songs skew a little darker, a little less pop-forward. On Transgender Dysphoria Blues, the rhythm section drove the train; here, they ride deeper in the pocket, Atom Willard’s drums bringing a little less snap and a little more thud, a sonic sentiment echoed by bassist Inge Johansson’s often-fuzzy tones. Its closest musical analog might be (ironically) 2005’s overtly political Searching For A Former Clarity; it’s certainly the most they’ve sounded like a band since then.

That deep integration opens breathing room for Grace as a composer. She rants in manic, explosive bursts on the Mountain Goats-esque “Norse Truth,” dabbles in light psychedelia on “Suicide Bomber” and rages against an actual machine on scorched-earth opener “ProVision L-3.” The loping lead single “333” even seems to borrow its main riff, bizarrely, from Saturday Night Live holiday perennial “I Wish It Was Christmas Today.” The end result is an album that’s both rewardingly experimental and occasionally disjointed, an apt match for Grace’s jumbled headspace.
When a band releases a landmark culture-shifter like Transgender Dysphoria Blues, it’s natural to wonder what comes next. It seems that Laura Jane Grace has been asking that same question of herself. Shape Shift With Me doesn’t offer a lot in the way of answers, but watching her fumble her way through the questions is a pleasure, regardless.