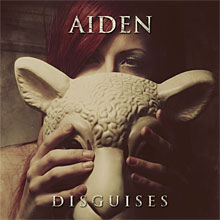 Propelled by the turbulent life experiences of frontman William “WiL” Francis, Seattle’s Aiden have always leaned towards darkness. Beginning in 2004 as visceral horror punks, they came on like Alkaline Trio gothed up to the extreme, but as the band grew up, so their sound changed too. 2007’s Conviction saw them swerve in a more electronic, Depeche Mode-inspired direction; the two albums from Francis’ solo side project, William Control, also followed that musical path. But Aiden returned to their more aggressive, raucous roots with their 2009’s Knives.

For Disguises, it seems that the four-piece have decided to combine these two contrasting sounds. The result is an album that serves almost as an overview of their career to date. It starts with a full-throttle return to their roots, as the heavy riffs of short introductory opener “The Devils Eyes” segue into the malevolent, punk blast of “Horror Queen.” “Malevolent Conversion” is just as raw, though its vicious, violent, visceral chug is offset by the angelic/demonic vocals that back the chorus.

After that solid block of intensity, though, the songs open up slightly more. “A Portrait Of The Artist” could be a song from Alkaline Trio leader Matt Skiba’s electro-tinged side project Heavens; “Shine” is a desperate, yearning, raging blast of punk; “Hysteria,” a diatribe against organized religion that’s bookended with a powerful quote from intellectual atheist Christopher Hitchens, could be AFI at their most anthemic. These disparate sounds that flow through Disguises do result in a slightly confused album, but, oddly, it still remains largely cohesive.

The slightly one-dimensional “ReEvolver” is the one letdown—less an Aiden song than pastiche of one—but the sparse, piano-led cover of Alkaline Trio’s “Radio” that ends the album redresses the balance. There’s nothing here that will lead Disguises to be hailed as a masterpiece, because there’s nothing here that hasn’t already been done before—either by other bands or by Aiden themselves—but it’s nevertheless a solid piece of work that demonstrates the power and passion of their dark melodies. In place of a best-of album, it serves well as an introduction to both sides of Aiden’s disparate nature from which new fans can choose their route into the band and old ones can relive aspects of the past.